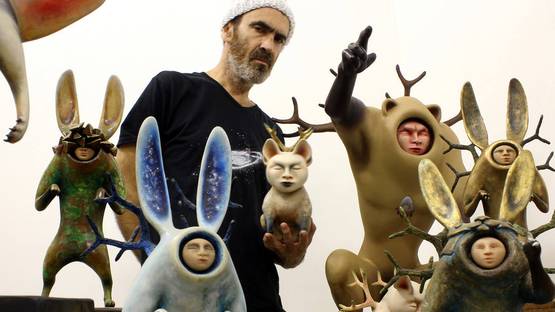 The desire to transcend and recreate the body in the fantastical work of Mono Cieza seem to have the central role. Apparently intrigued by the limited human physicality, the artist constructs and shapes hybrid bodies which are even reminiscent of the ancient pagan traditions which saw the concept of the body from more spiritual perspective. His works are a journey in mythical narratives and are in function of the artists need to depart from reality and become entwined with nature. Usually embodied in paintings and sculptures, Cieza’s ideas are suffocated with dense introspection processes and do reflect the artists search for utopia.

Mono Cieza was Born in Argentina and moved to Barcelona in 2001. From the early age he was hooked on art, especially drawing and music were and remained his passion. In Argentina, Cieza studied composition at Faculty of Fine Arts of La Plata and after settling in Barcelona he started making music for films and studied cinema. During that time, he started to produce stop motion movies in collaboration with his friend and artist Peca, while slightly later studied modeling at La Llotja. Besides that, his actual artworks were shown at many international galleries, fairs, and showrooms.

Mono Cieza is mainly concentrated on producing sculpture in diverse materials and combinations. By drawing inspiration from his dreams and nightmares, the artist produces peculiar characters which inhabit his works. Namely, those creatures are the half human half animal, they observe, perhaps protect, or kindly plunder the world looking for nothing in particular. On the other hand, they look more like armors for humans to dress so they can be perceived as new forms of cohabitation where the man and animal are conjoined in one. The soul seems to be inside the armor, so the entity stands almost godly looking at the sky.

Authentic works in shape and concept

As it was mentioned already, Cieza has been collaborating with the artist Peca on several stop motion films. Interestingly, the aesthetics of those works despite being collaboration are far more similar to Cieza’s own style and perspective. Mechanical bodies and fantastical beings or hybrid bodies, in general, are what triggers him the most. In addition to Cieza’s ongoing creativity is the electronic music he produces in the form of soundtracks which largely contribute to the concept of surreal and outlandish narratives.

The totemic characteristics of Cieza's creatures

The Achievements and Dedication

In recent few years, Mono Cieza’s work has been recognized and he has exhibited in a several important galleries and art fairs. Therefore, the artist's contribution to the constantly growing movement of Pop surrealism has been noted especially because of his peculiar approach to sculpture. Namely, the objects Cieza produces are hybrid and their delicacy makes them plundering between applied arts, miniature sculpture, and toys. The skillfulness is rather apparent and reflects his focus on building the character whose charisma, uniqueness and vision should both amaze and puzzle the observer.