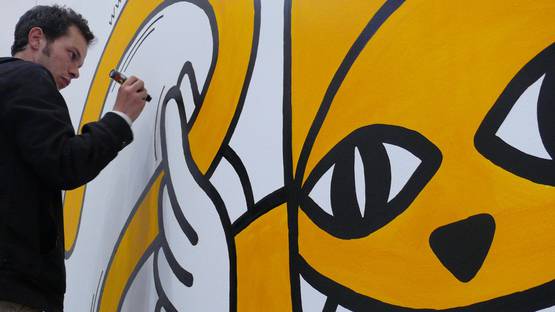 Discreet and unobtrusive, Monsieur Chat or M. Chat has been working on the streets since he was 15. His anonymity was broken in 2007 when he was caught painting his famous symbol – the cat. The man behind the mask was revealed to be Thoma Vuille, but he didn’t allow himself to be disturbed by this. Instead, he continued to exacerbate the already crystallized curiosity around the urban graphics of his increasingly present symbol. The shadow of his anonymous existence dispersed upon being shined on, but in the end, he realized that he and his alter ego are one and the same person, so he learned to drop the mask and raise his name alongside the signature of his alter ego. Believing in the idea and repeating it continuously over time, the artist got to the point where he was able to shape those around him in a way that, ultimately, the image he projects outwards is reflected back at him at times when he starts to entertain his own doubts about it.

Born in Boudry, in the canton of Neuchâtel, Switzerland, Chat began roaming the streets around 1987. He studied at the Institute of visual Arts of Orléans, graduating in 2001. In 1997, during one of the workshops, the grinning cat was born. In his, now omnipresent symbol, the culture of the neighborhood meets the never-ending optimism of the artist, making a combination that is easily recognizable and widely famous. His dream of uniting human beings, different as they might be, is now possible. That single unifying subject has been found, and he's ever since on a mission of spreading that subject throughout the world. It was this kind of contagious optimism that nudged the film-maker Chris Marker into approaching the artist, and eventually making a documentary about him in 2004. Reflecting on France’s state after the 9/11, Marker used the phenomenon of the Chat’s cat to explore the sad feelings of the people, but to share some optimism as well. The attention was not focused on the artist, for once, as we do not need to know his personal history to be able to feel something upon seeing his work. In fact, the state of mind, or an attitude, or a philosophical aspiration, is represented through an image. Behind that image lies all the simplicity of a smile painted on a wall, and all the power that comes with it. Vuille keeps the drawing simple and the line clear. On the first sight, the cat looks like a logo. However, it can’t be reduced to a logo, as it’s so much more than that. Belonging to street art, it’s a character with a strong identity and many variations. A character that achieves a symbolic dimension through its simplicity.

A Dispute with RATP – Let Art Be Free

Street art is highly unpredictable – where one sees inspirational pieces, others see the destruction of property. The artist had been previously arrested on brush in hand by the Police Municipal of Orléans in 2007. The Régie autonome des transports Parisian demanded 1,800 euros in damages, stating that Vuille had, without prior authorization, drawn inscriptions, signs or drawings, in the case of Cat Heads on the walls of the Châtelet-Les Halles station during its renovation in May 2014. Due to some contradictories, Vuille’s lawyer raised the invalidity of the notice of the artist, stating that he and his client were not completely sure what they were accused of. The court found the nullity of the summons, and the RATP finally asked one euro in damages, an amount incomparable to their previous requests. The whole thing turned out to be nothing more than a bad memory for Monsieur Chat, stating that he was not a criminal, but an artist. He also explained that his intention was to humanize a transit corridor, which was gray. All he did was putting some color on it, sharing happy feelings with all who passed nearby.

Still Strong and Popular in 2016

Vuille shows no signs of slowing down. In March of 2016, he came in Hong Kong, China to paint a mural on the Hotel Jen on Queen’s Road West. The piece is 13x13 meters and is one his biggest so far. As always, he intended to bring humor and humanity to Hong Kong with his creations. Once anonymous, Monsieur Chat was forced to reveal his identity in 2007, when he was arrested. Since then, he has come to embrace his public profile without expressing any regrets for his past actions. Looking forward instead of backward, he takes his responsibilities seriously. Being unmasked opened new doors for him, and he didn’t lose any of his energy that was originally behind the creation of the iconic Smiling Cat.

He is represented by Galerie Brugier-Rigail and Galerie Onega.