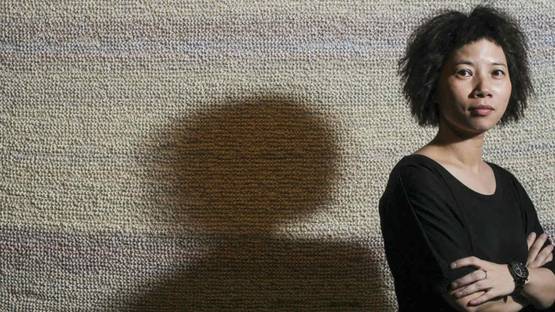 Movana Chen is a Hong Kong-based contemporary artist who was born in 1975. She studied fashion design at the London College of Fashion and received a Bachelor of Fine Arts from the Royal Melbourne Institute of Technology Univeristy in Hong Kong.

Movana started her knitting projects in 2004 by making “magazine clothes”, a genre that involves playing with deconstructing and reconstructing of meanings and content by knitting shredded magazine papers. Her work is a multi-disciplinary fusion of media, fashion, performance, installation and sculpture which has been presented at different exhibitions, art festivals and events globally, including those in Hong Kong, London, Paris, Seoul, Beijing, Shanghai, Sicily and Rotterdam. She was invited to represent Hong Kong at the Seoul Fringe Festival in 2007.

Movana was one of the 30 finalists of the 2011 and 2012 Sovereign Asian Art Prize. Her art works have been collected by the Hong Kong Heritage Museum, Louis Vuitton and private collectors from Hong Kong, China and France.