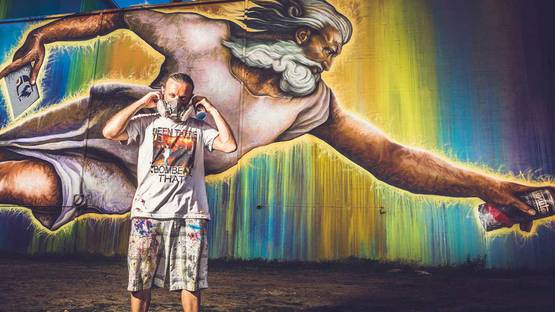 Sebastien Boileau  aka “Mr. D” is a French artist who was influenced by the American Pop Art and Graffiti movement of the 60s, 70s, and 80s. Born in Versailles, France, Mr. D began his artistic endeavors in Paris in 1987 at the age of 14.

In 1989, Mr. D created his first piece of canvas art, as well as his first large scale mural. In the early-90s he began to travel the world painting in remote countries like Sierra Leone, Tunisia, Senegal, and many western destinations. In 1995, Mr. D was invited to participate in his first contemporary art group show in Paris.

He migrated to the United States in 1998 and in 2000 launched what is now a highly successful mural company in Houston, Texas, Eyeful Art Murals and Designs, serving both the public and private sectors. The company’s team of experienced artists have been working with architects, designers, school principals, major companies, and the sporting industry to create unique site-specific artwork, graphics, and murals for indoor/outdoor spaces for public/private sector organizations.

“After 28 years as an artist, the stigma remains, and I want to change people’s perception in regards to Urban Art. My artistic and personal goal is to use my skills, experience, and credibility to demonstrate an “Urban Art as Fine Art” approach through ‘Canpressionism’.”

Mr. D’s recent accomplishments include: produced the award-winning “Preservons la Creation”, the biggest mural in the history of Houston at 9,750 SF, in May 2014; chosen by Red Bull to exhibit at Scope Miami Art Fair in 2014; elected as a Liquitex paint brand ambassador and sponsored artist etc…