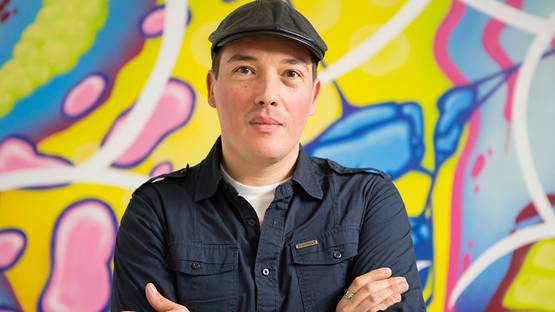 David Duvoisin aka "NadaOne" is a Graffiti artist who creates artistic concepts that are both eye-catching and colorful by reproducing a wide and impressive variety of subjects. Born in Switzerland in 1975, he became one of the first Graffiti writers in his country and since 1989 he has dedicated, without limits, his life to Graffiti and Urban Art.

At any scale and on any surface, he brings his works to life and doing so he creates an attention-grabbing experience. He has worked in the public realm since 1993 and therefore has the ability to understand the needs and imperatives by creating unique and original designs that are truly works of art. By traveling the world and painting at innumerable festivals and events by representing Switzerland, NadaOne is an international reference in this field and has collaborated with some of the biggest names in Graffiti & Street Art scene.

Its strokes and its recognizable and unique painting technique enable him to realize a lot of ideas from Styles, Characters, Background and general wall/session concept on the most possible places. Teaching and sharing Graffiti was one of his focus point and he was hired by various cities and youth centers to manage and coach their young writers.

He represents crews like the MAC (Mort Aux Cons, France), AM7 (Angels of Madness - The Almighty 7, USA) and the Team ALOSTA (Belgium - USA) and his works are published in various magazines, books, weblogs.

He was asked to work for the main producers and licensors (Toy2r, Red Magic, Play Imaginative, Kidrobot…) to customize and design urban vinyl figurine and he is the creator of the iconic KID666, manufactured as a limited edition vinyl toy worldwide.

He has been commissioned to paint furniture for legendary designer Philippe Starck, as well as murals for Marc Ecko, Sony, Redbull, Nestlé, Honda, Pixar, just to name a few. From now he wants to present more personal works and new visual ideas on canvas, interior and exterior spaces and other support.

NadaOne lives and works in Los Angeles (USA) and Switzerland.