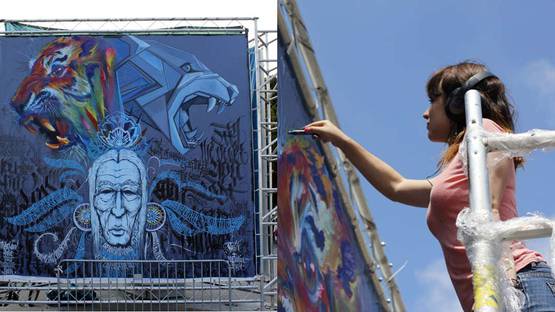 Natalia Rak is a Polish artist born in 1986. Rak is known for her extremely vibrant large-scale murals. She graduated from the Academy of Fine Arts in Lodz, Poland, with the Diploma of Spatial and Poster Design.

Natalia was interested in art since she was a child. “From my childhood I always know that I want to paint and make many things with using my imaginations, that’s why I was learning to practice different types of art like drawing, screen-print, graphic design, package design, traditional graphic, painting, sculpture.” A couple of years ago Rak started getting into Street art. “I like Street art because I like contact with nature, I feel open to world. When I’m painting a big wall I feel a magic of large surface. I like experience something new and have fun with it. I like smell of the spray cans and I feel happy while I’m painting.” For her influence, she cited various sources. “My influences are old photos, daydreams, book illustrations, Marvel Comics books, and artist like Stanisław Ignacy Witkiewicz (Witkacy), Jacek Malczewski, Norman Rockwell, Hans Rudolf Giger.”

Since 2009, Rak has participated in many group exhibitions and street art festivals. Her work has been exhibited throughout Europe, and she was noticed at some of the continent’s most prestigious street art events. Some of the exhibitions she was a part of are group exhibitions at Fourth floor Gallery in Łódź in 2009, graffiti happening in Zgorzelec entitled Different histories, join future in 2010, Scabb Festival in Turek in 2011, First Polish Auction of Street Art at Remex Gallery in Warsaw in 2011, 2..1..0..go at BWA in Skierniewice in 2011, Drawing and Sculpture, group exhibition in Kobro Gallery in Łódź in 2012,  collaboration painting on Public Provocation in the Carhartt Gallery in Weil am Rhein in 2012, Scabb Festival in Turek in 2012, Festival Walk&Talk in Azores in 2012, Festival All you can paint in Halle in 2012, Stroke Urban Art Fair in Berlin in 2012, Exhibition of Polish artists in Intoxicated Demons Gallery in Munich in 2012, at The Ride Gallery, USA in 2012, The Best of diploma 2012, Central Museum of Textile, Lodz in 2013, No name Fest, Fleury-les-aubrais, France in 2013, Cash Cans & Candy in Gallery Ankerbrotfabrik in Vienna in 2013.