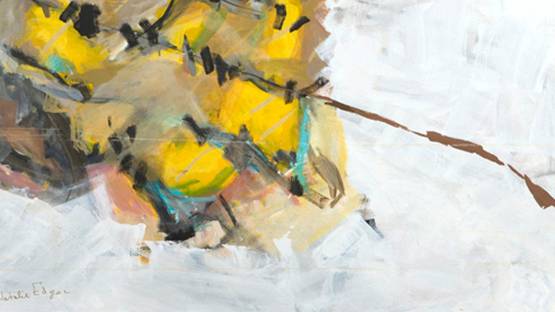 Natalie Edgar is an American artist, known for her multi-layered paintings, which she creates in her unique Abstract Expressionist style. Growing up in New York City, Edgar was exposed to a profusion of art, a perfect environment for shaping the amazing and raw talent that she possesses. In 1950, Natalie started studying art at Brooklyn College, from which she graduated in 1954. She learned from some of the most prominent artists and painters of the time, including Ad Reinhardt and Mark Rothko. Moving in this kind of circle of artists, Edgar learned that the point of art is to present ideas not the art-making process. Art should be truthful and honest. She further developed her artistic expression while attending Meyer Schapiro classes.

Natalie Edgar met and fell in love with Philip Pavia, a renowned sculptor known as one of the original members who set up The Club, a group which gathered artists around the ideas and philosophies behind art. Some of the leading artists of New York art scene, such as Mark Rothko, Barnett Newman and Hanna Arendt, were frequent visitors of The Club.

Since 1980, the couple started their journey around Italy, eventually discovering Pietrasanta, a small town in Tuscany. They decided to spend every summer there. The breathtaking scenery became Natalie's second studio, and yet another "school" where she discovered color, volume and rhythm.
From 1966 until 1988, Edgar held the position of Adjunct Assistant Professor at CUNY, teaching Art History. Subsequently, she moved to New School of Social Research, where she taught Painting until 1994. She was also a visiting professor at University of Minnesota. Among many awards, she was also a recipient of Pollock-Krasner Foundation Grant in 2010.

An eminent New York artist, Natalie exhibited her works extensively in her native city, participating in both solo and group exhibitions. In 1997, she had her first exhibition at Woodward Gallery, titled Disclosure. Some other exhibitions include New Works in 1999, Watercolor Paper in 2001, and the 2010 exhibition From Above, all of which her held and organized by Woodward, the gallery that now represents her. Edgar's most notable exhibition was the 2014's highly acclaimed Abstract Journey, which consisted of majority of her works.