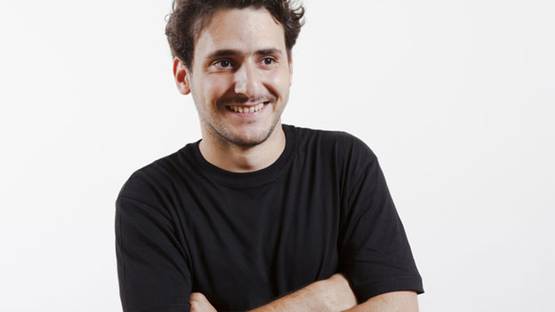 Using the balanced and reasonable combination of reality and fiction, Neïl Beloufa creates complex narratives, credible and real, despite their fictional source. With the sense of irony, his vision emerges from general knowledge and ideas that each viewer brings into the exhibition space. He masterly manages the narratives, moving between the real and imaginative, producing a new approach. Beloufa’s installations, made of Plexiglas and plywood, with foam walls and pop-culture references, represent the base for his films, at the same time expanding and obscuring these moving images. He usually projects his recorded material onto sculptures and installations that reflects the images and elements of the video.

His naratives are between the real and imaginitive

The Art is Not Clever

This French artist Algerian origin studied at École Nationale Supérieure des Beaux-Arts, Paris where he received his Visual Arts National Diploma. He continued his education at Cooper Union, New York, and CalArts, Valencia. His work is shown all over the world, in numerous solo and group exhibitions, and on prestigious film festivals. Basing his work on jokes, Beloufa is questioning some serious social issues. He thinks that people shouldn’t be too serious even when they reconsider the very important subjects. He is using the joke as the way to show that art shouldn’t be clever.

For his current exhibition Project 102 in the Museum of Modern Art in New York, Beloufa made his architectonic installations by hand, using the inexpensive materials and techniques. His interesting combination of sculptures and moving images creates unique viewing spaces. Treating the projections like objects, he is spreading images onto different surfaces. The artist asserts the technological development with the social moment by revealing the cables and presenting the images through closed-circuit television. In the center of his presentation is a video People’s passion, lifestyle, beautiful wine, gigantic glass towers, all surrounded by water. In a film which imitates popular genres of science fiction and infomercial, a group of people in the undetermined city with lots of enthusiasm describing them adore of urban culture.

Finding the hidden truth with the reverse perception

His installations sometimes contain different modular pieces, which consists of common objects. Creating the multidimensional representation, this works engages the viewer to jump from one suggestion to another. Having the familiar landscape in front of them, the visitors are often confused by unusual propositions and layout of the objects. For example, in work Maya SP, the effect, the causes and the fall, the viewer meets with something far from his understanding. With the reverse perception of the common objects, he is trying to find a hidden truth of the old historic event. Using the material which can be bought in the store, Baloufa is showing his interest in standardization. Although they are made of familiar stuff, his installations have a unique stamp, some kind of signature when the artist marks them with his own pee or the cigarette butt.

Beloufa creates the documents of his videos

The Filmmaker and The Sculptor

Always trying to make the relation between the observer and the fiction he sees, Baloufa claims that film is not happening on the screen, but in the middle of one’s relation to it. He aims to provoke people to ask questions, he wants them to be caught, but not believe it. His films have specific conceptual frames, but the sculptures and installations have their own presence. Creating the documents of them, he is trying to represent the life as the parasite, bringing the experience towards the understanding in the real time. With the attempt to create a linear platform, Baloufa wants to place everything on the equal level. Considering himself as an editor, not a sculptor or a filmmaker, he is the one who edits the content and ideas.

All images used for the illustrative purpose only