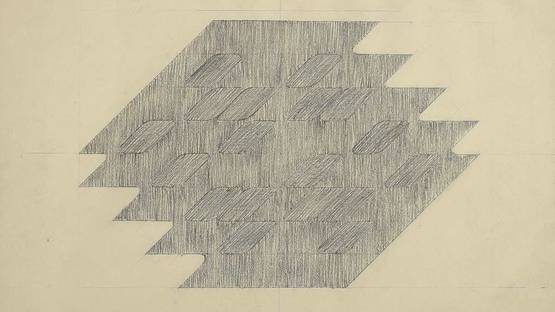 An American artist, Neil Williams pioneered the shaped canvas during the 1960s. His work of the 1960s, 1970s and 1980s is associated with geometric abstraction, hard-edge painting, color field, and lyrical abstraction.

Born in 1934 in Bluff, Utah, Williams graduated from the San Francisco Art Institute in 1959 and moved to New York City that same year. He began exhibiting his paintings in New York in 1960. His first solo show was held at the Green Gallery in Manhattan in 1964, and during that same year, he participated in the exhibition The Shaped Canvas, organized by the Solomon R. Guggenheim Museum, alongside Frank Stella and Paul Feeley.

One of the first American artists to investigate the aesthetic potential of the irregularly shaped canvas, Williams initially depicted hard-edged geometric forms, experimenting with hexagonal, polygonal, and trapezoidal canvases with as many as fourteen sides. These works were rendered in bold, saturated pinks, greens, blues, and blacks. His later paintings evolved into expressive, energetic abstractions, in which he synthesized landscape and floral elements inspired by the ambiance he encountered on visits to Brazil. The artist was in the process of moving to Brazil when he died in New York City in 1988 at the age of 53.