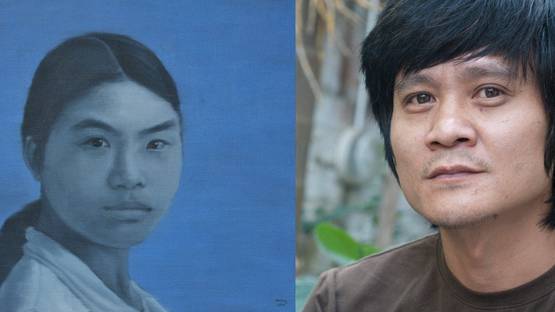 Nguyen Quang Huy is a Vietnamese contemporary artist, best known for his paintings of the landscapes and the women of the highland H’mong people. Nguyen uses a predominantly blue palette, inspired by the natural indigo dyes.

Nguyen Quang Huy was born in 1971 in Ha Tay, Vietnam. He studied at the Hanoi Fine Arts University, graduating in 1996, and he as well participated in residencies in Germany, Australia and the USA. Referred as a member of a small group of pioneers of Vietnamese contemporary art, Huy was one of the Hanoi artists who were among the first to display their work internationally, and who significantly influenced the subsequent development of contemporary art in Hanoi.

His paintings reflect the misty dreamlike coolness of the mountains and cultural aspects and the beauty of the H’mong girls, his most used subject of matter. Highland people called the H’mong tribe, ethnic minority residing in the mountainous areas in Northern Vietnam, whose climate is often clouded in fog and mist, are depicted in series of portraits and landscapes. Nguyen Quang Huy has traveled there many times over the years and gotten to know the landscape, people and their ways of life, giving a tangible atmosphere in his paintings.

His most recent work, named Dancing on Blue Sky, take a more abstract and surreal path, depicting a female body merged with fantastic, magic elements. ‘Women are beautiful. Normally when people are happy their whole body wants to swing and dancing is the common body language that people create to express their desires as well as expose their sexual attraction. My paintings in Dancing on Blue Sky cherish the beauty of women’s body, especially of the women who are independent, free and fulfilled in life’, as the artist states.

Huy has had solo exhibitions in Vietnam, Germany, France, and Singapore, and participated in numerous international group exhibitions, including in Singapore, Germany, France, Japan, the United States, Finland, Thailand, China, Australia, the Netherlands, and the United Kingdom. His works are included in the permanent collection of the Fukuoka Asian Art Museum, Japan, the World Bank Art Program, and the Post Vidai collection of contemporary Vietnamese Art, Switzerland.

When not travelling, Nguyen Quang Huy lives and works in Hanoi, Vietnam.