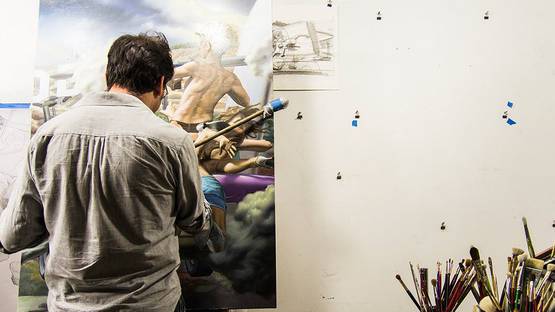 Nicola Verlato is an Italian-American visual artist who creates his works through an articulated process – by using classical techniques as well as modern technology, 3D Modeling programs such as Maya and ZBrush.

Verlato was born in Verona and began painting at a very early age. His artistic education has been quite unorthodox - learning from Fra' Terenzio, a painter in the monastery of Franciscan monks of Lonigo, he started to paint about the age of 7, and to sell his paintings about 9. He consider that monastery nearby his village in northeast Italy, the place where he learned how to drawing in the academic style. His first serious show was at the age of 15 in the town hall of Lonigo, a 3 person show in collaboration with other 2 artists of the area.

Nicola has been also trained in classical music from the age of 9 (classic guitar, Lute, piano and composition) at the conservatory in Verona. Later, he drove his attention toward rock music playing electric guitar, bass, sinths, composing song, jingles and soundtracks for documentaries. Nicola also studied architecture at University IUAV in Venice from 1984 to 1990 though he never completed his degree. He lived in Venice  for almost 13 years painting portraits and allegorical scenes for the local aristocracy and the affluent foreigners living in that city. During this period in Venice he worked on almost everything that was connected with drawing: stage design, temporary decorations, illustrations, comics, storyboard etc.

Around 28 he started to be interested in contemporary art, and, consequentially, to show in numerous gallery in Italy and abroad in solo and group shows. After spending 7 years in Milan ,In 2004, he relocated to New York. While living in New York, he was a professor teaching composition and painting courses at New York Academy of Art.

In these last years he showed principally in New York City and in various galleries and museum around the States, Italy and Norway, but also in India as well as Germany, Holland and other European countries. His major achievement has been his participation with an installation of paintings and sculptures as a representative of the Italian Pavillion at the 2009 Venice Biennale. Verlato's signature style is classical drama, modern fairytales, ancient strives.  Specializing in fusing Americana, popular imagery, and traditional painting techniques, he is best known for his highly refined allegorical surrealism that recalls the murals of Thomas Hart Benton and the heightened drama of 17th-century Italian baroque paintings. Featuring spectacular light effects, twisting nude figures, and dense compositions, Verlato’s work depicts a dark future that recalls a mythological past. In 2009, he represented Italy at the Venice Biennale with a series of sculptures and paintings, the latter recalling apocalyptic altarpiece panels.

Since 2011 Nicola Verlato lives and works in Los Angeles.