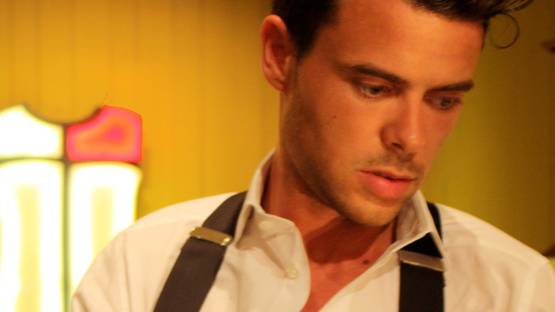 Nicolas Saint-Gregoire is a French artist and designer, born in 1983, known for his light sculptures created using with Plexiglas and neon. Behind the vivid colors and clean lines of his sculptures, Saint Gregoire’s work is more subversive than it seems at first.

Since 2007 and his first one-man exhibition titled Show Me the Light, Saint Gregoire has strived to break the invisible boundaries that isolate visual art from other forms of creation.

In 2010, with his exhibition ArtDesign, he sought to transcend the boundaries between visual art and industrial design. The exhibited works are part of a furniture collection - stools, chandeliers, lamps, tables - but are freed from all functional, economic or social considerations inherent in the production of these design pieces. The presentation format - an exhibition in a gallery - and the context in which the works stand, contribute to positioning the pieces as art in and of themselves.

Meanwhile, Saint Gregoire is interested in another limit, that between the visual arts and fashion. It is only natural that he turns his attention to the personality and creations of Yves Saint Laurent. He shares with the life and work of the designer a similar interest in bringing together various forms of artistic expression. The fashion designer's phrase "I tried to show that fashion is art" captures the same spirit.

The artist is represented by Artemisia Gallery, based in New York.

Nicolas Saint-Gregoire divides his time between New York and Paris.