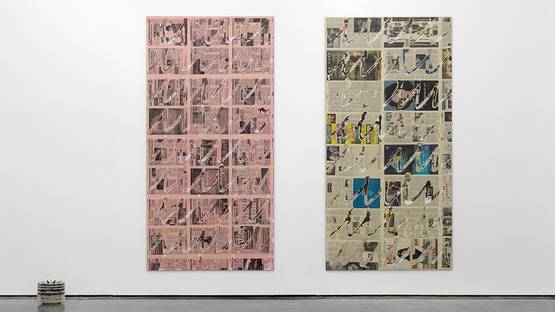 Nikolas Gambaroff is a widely known German visual artist, who is primarily concerned with the interrogation of the very basic premises of the conventional painting. As the artist said himself, he tries to dissect, deconstruct, and re-evaluate (mainly within the limits of the activity painting) the customs, expectations and myths that painting as part of our visual culture brings along.

Nikolas was born in Germany in 1979. He graduated on Humbolt University of Berlin and later he obtained another degree at the University of the Arts also in Berlin. He got his MFA on the Bard College School of Visual Arts, Annandale-on-Hudson in New York.

All of Nikolas works orbit somewhere between painting and sculpture due to the fact that the artist is consuming and combining both of the approaches, sometimes blurring the line between the two. For example in his exhibition “Male Fantasies” he primarily exhibited paintings but with a different process included. The paintings did not only inhabit the space, but expanded into the realm of sculpture by being broken down and reconfigured into consoles and chairs. Painted carpets, stacks of plates, and stools are domestic furnishings displaced in an otherwise vacant gallery environment. With one chair constructed from a painting hanging on the wall and not utilized, and another on a platform both blocking a walkway and on display, viewers were confronted by a painting practice that situates itself outside conventional display methods.

Nikolas explores issues like authorship, distribution and expression, but also how the modern economy and social values affect the value of the particular art piece. In his work he questions the very structure of the paintings in general, focusing on the supporting materials which are a backbone of the particular piece. This young artists introduce the elements from 'outside' the traditional compass of painting thus providing further opportunities to deconsecrate and demystify painterly production so it one can open a debate about the mechanisms that confer artistic status. His most current focus is aimed to explore the new tendency of the modern art – Emerging new form of reality, one which reveals the downsides of the realities currently present in the art itself.

From 2007 Gambaroff exhibited extensively around the globe with majority of his exhibitions held in US and Europe. He currently lives and works in New York City.