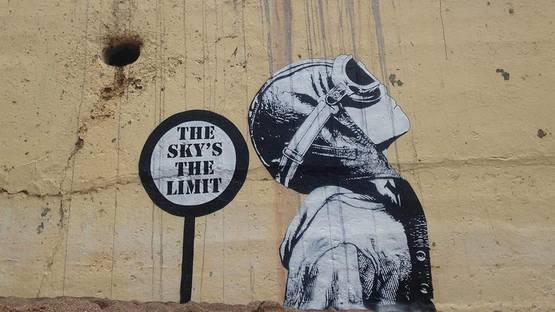 NME is a self-taught urban and street artist from the South West UK. His work is quite varied and versatile - he always has a few different projects on the go. In addition to his street art, he also works on incorporating mixed media in his pieces, along with stencils. NME is involved in the Free Art Friday movement, which is an interesting project organized by a group of artists who create artworks and leave them on the streets so that their fans can find these pieces and take them home.

NME has been brought up in the urban area of the UK and consequently he was exposed to street art from an early age. He was regularly skateboarding with his friends and listening to hip-hop and it was quite natural and spontaneous for him to try using spray paints at some point. In the beginning, he didn’t take his art trials seriously – it was more of a messing aroud. However, step by step, NME started developing his passion for street art, since he discovered that this form of art is the perfect outlet for his creativity. NME began creating more elaborate artworks roughly two years ago – before that, he used to have just a couple of stencils he was spraying onto canvases.

The Importance of the Viewers' Response

For NME, it’s hard to pinpoint the sources of inspiration for his work as well as the meaning behind his pieces. While he definitely has his reasons for creating a specific piece, he believes that the viewers’ response to his artworks, together with his own reflections, constructs the meaning of his work. NME underlines the fact that he is immensely grateful to the internet and social networks because they made his art easily and promptly accessible. He can simply take a photo of his artwork, upload it on Facebook or Instagram, and his work will be viewed by people across the Europe and the United States, which also means he’s able to get the feedback for his pieces unbelievably quickly. Currently, NME is creating more complex artworks, which are multidimensional, textured and layered larger-scale pieces. He is also developing a Coffee Fiend character, which was initially created for the Free Art Friday project. This humorous coffee addict character is already featured in NME’s street art as well as in various animations, videos, and coffee publications.

NME believes that the viewers’ response to his artworks, together with his own reflections, constructs the meaning of his work

Even though NME started small, nowadays the art he creates became his way of life, a crucial part of his identity. I just put pencil to paper, knife to card, and hand to can, and try to let the magic happen. It’s my labour of love and a way of life. I live by the paint and will probably die by the fumes, NME says. Currently, he is preparing exhibitions and paint jams on both national and international level, hoping to reach out to a wider audience.
The artist is represented by GraffitiStreet.

Featured image: NME - The Sky is the Limit - Courtesy of GraffitiStreet Gallery
All other images via isupportstreetart.com