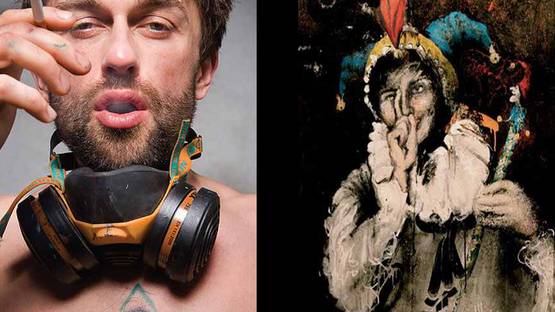 Nomad is a German artist born 1970 in Berlin whose works connects his sensitive artistic side with the ornamental style of his street art and the graphic with the sketchy. There are clearly influences from classical painting, in particular from the Renaissance period. As a result, Nomad’s painting does not aim to be complete – it is an inventory of the here and now that adapts social reality and processes it multi-dimensionally. It retains the ease and aesthetic of his freely improvised work on the street. Nomad’s works are simple celebration of freedom, life and its vanity.

Throughout twenty turbulent years, Nomad spent time at the centre of the Berlin graffiti scene and encountered life as a homeless street artist in San Francisco. He slept next to junkies in the park and washed himself every morning inside a McDonald’s bathroom. Today, he has finally made it within the art world. Educated and inspired by skateboarding, Hardcore Punk, Graffiti, Hip Hop and Rave Countercultures of the 80′s, his visual imprint on the early Berlin street art scene was and still is immense. Thousands freestyle roadside trash paintings and marker drawings on streets, earned him countless admirers and collectors and made his art visible all over the world – from blogs and books to the homes of Hollywood Stars like Shepard Fairy, Salma Hayek, Demi Moore and Ashton Kutcher.

His style – created by his lifestyle as a vagabond – is always evolving and incorporates “the necessary” – as he proclaims to use whatever style or material is available to maximize the focus on the pleasure of the creation. This can be a Renaissance inspired canvass in his studio, a marker scribble on a doorway or trashcan, a graffiti bombing on the wall of a huge dam or a sculpture made out of some tumbleweeds in the desert.

The works exhibited by Nomad move to and between humorous ease and deep emotionality. Tragedy, love and emotion come up against humor, laissez-faire and improvisation. As a result, he uses on the one hand marker aesthetics in the form of lines, which express the human need for order. On the other hand, he lends his artworks an artistic component with colored and sketchy elements, which symbolize the chaos of existence. The message is one of self-irony and a positive worldview, which are meant to encourage the observer to think.

Nomad is invited regularly to street art festivals, exhibitions and performances. He counts among the most enduring street artists in Berlin and the world. In the last six years he has painted 2000 to 2500 rubbish objects, which were quickly snapped up off the street by passionate collectors. In the summer of 2009 Nomad worked with American actor Ashton Kutcher to paint the roof of Planet Hollywood in Las Vegas. The large-scale art campaign received international attention.

From painting to dj-ing, as well as participating in charity projects for young people, Nomad is thinking about going into the direction of film, and also wants to write a children’s book with illustrated poems and stories.

According to Nomad, mission of his life is “Freedom” and ‘Access All Areas’ is freedom to him.