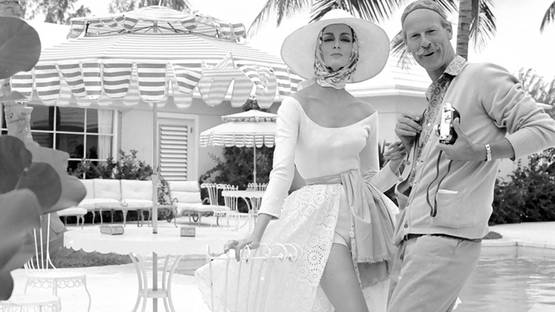 Norman Parkinson was British and one of the twentieth century's best-known fashion photographers. He was active for over 50 years and was instrumental in taking portrait and fashion photography beyond the stiff formality of his predecessors and injecting an easy and casual elegance into his images.

Norman Parkinson's impulsive and unstructured style changed forever the static, posed approach to fashion photography, while his enchanting, idiosyncratic persona charmed his sitters and projected an alluring and glamorous public image. Standing at 6 feet 5 inches tall, Parkinson was unable to remain unobtrusive behind the lens and instead created ‘Parks’, the moustachioed, ostentatiously elegant fashion photographer – as much a personality as those who sat for him, and frequently more flamboyant. His flawless professionalism, manners and well-rehearsed eccentricities reassured the uneasy sitter and disarmed the experienced.His photographs of celebrities, artists, and the British Royal Family, as well as leading figures from the worlds of film, theatre, politics and music are known throughout the world and have become icons of twentieth century style.

In a career that spanned seven decades, Norman Parkinson dazzled the world with his sparkling inventiveness as a portrait and fashion photographer. His work provides a comprehensive and unique record of the development of fashion design, photography and modelling from the 1940’s to 1990. By charting the changing face of fashion through the twentieth century, Norman Parkinson’s work also serves as a hugely significant historical record and a reflection of the societal changes that shaped our modern culture.

Parkinson worked for a wide range of publications, once declaring “a photographer without a magazine behind him is like a farmer without fields”. His long association with Vogue (working with Audrey Withers, Diana Vreeland and Grace Coddington amongst many others), and his numerous assignments for Harper’s Bazaar, Town & Country and other international magazines, brought him worldwide recognition. Parkinson’s work is still considered hugely innovative and his influence remains evident in the work of many contemporary photographers.

Parks reinvented himself for each decade of his career, from his ground- breaking, spontaneous images of the 1930s, through the war years and the Swinging Sixties to the exotic locations of the 1970s and 1980s. By the end of his life he had become a household name, the recipient of a CBE, a photographer to the royal family, an Honorary Fellow of the Royal Photographic Society, and the subject of a large scale retrospective at the National Portrait Gallery, London.

Norman Parkinson died whilst on location in Singapore shooting for Town and Country in 1990.