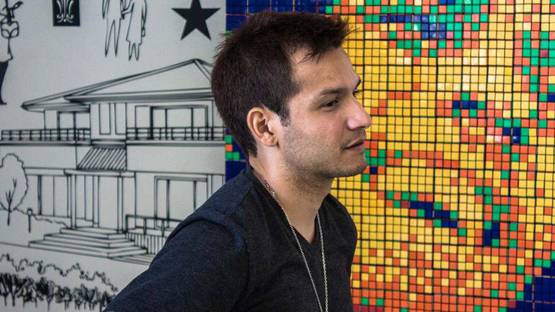 As someone who at the beginning didn’t want to show his art to the world, and described himself as a ‘closet artist’, Odlaw has come a long way. This Los Angeles based painter uses Waldo, from the legendary Where's Waldo series, as the main theme and inspiration. Artist’s mission is to unravel the mystery behind this character’s identity in relation to its position, inferences, and meaning. He wants to find who Waldo is, opposed to where he is, or what he does. The diversity of materials such as aluminum, canvas, paper, acrylic, or even 18kt gold and resin give a special note to his art and bring it to a completely new level.

The artist grew up in Seattle area, where he got the inspiration for expressing the creative potential that is hidden inside him. Odlaw showed the interest and passion for drawing and painting in his sophomore year of high school. Ever since, he spent hours after the classes, during the night and day, working hard, practicing, and improving his skills day by day. As many other people Odlaw was a books addict, so he did everything he can to enjoy in them. While he was refining his style over the years, the author remembered his fondness for Waldo. The reintroduction of Odlaw’s childhood icon is interpreted through a pop art perspective, influenced by the famous Andy Warhol, and his colorful figures, and characters who are dressed up in striped shirts.

Odlaw, the character of the “Where’s Waldo’ has only a few good attributes, while the bad ones are numerous like mean, nasty, loathsome, and disgusting. He represents an evil twin brother of the Waldo. Thanks to the illustrator Martin Handford, the original creator of the Waldo & Dreamworks, Odlaw the artist has an opportunity to paint Waldo in a way no one has done before, by putting him everywhere, in combination with the modern frame and art perspective. The author uses different series of colors like black on black on one side, or vivid and vibrant spectrum on the other, to whom he adds amazing details. This American painter is also influenced by Basquiat, Damien Hirst, Murakami and many others.

The author uses different series of colors like black on black on one side, or vivid and vibrant spectrum on the other

The Rise Among the Stars

In 2010 the artist decided to paint Waldo on canvas, but he also knows to experiment with other mediums such as metal. Although at the beginning Odlaw was satisfied with keeping his art just for himself, at one point he got bored, so he decided to make an Instagram account. People soon began to discover his potential and talent, the word of skill spread, and Odlaw became very popular. The author inspires young and un-established talents to enter the street art community once they feel they are ready. Odlaw’s paintings and drawings can be seen in many private and public collections, galleries and exhibitions, as well as at the charity events around the world.

Featured image: Odlaw - Portrait of the artist
All images copyright of Badir McCleary; All images used for illustrative purposes only