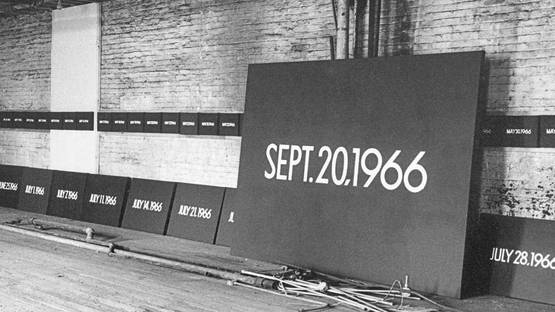 Turning each day into the monument, On Kawara has for over five decades created paintings, drawings, books, and recordings that explored chronology and the way it could be a measure of human existence. The existentialist proposition of his work was marked by his meditative approach to concepts of time, space, and consciousness based on the idea that human life doesn’t add up to anything beyond itself. From the first time when he took the paint brush, Kawara depicted nothing but the different dates. He started his famous Today series on January 4, 1966, in New York and continued to repeat the same process at the end of his life. One day only was reserved for one painting and if he did not complete it by midnight, he would destroy it. Along with Lawrence Weiner, Joseph Kosuth, Hanne Darboven, and other Conceptual artists that created during the middle 1960’s[1], Kawara was responsible for the reduction of the art piece to pure information or idea and art's deprivation of any personal emotion.

On Kawara was born in Kariya, Japan on December 24, 1932. He was a teenager when the bombing of Hiroshima and Nagasaki occurred, which had a great impact on his artistic development. During the early 50’s he created the Bathroom series directly inspired by this event, depicting naked humans in different stages of disfigurement and slug-like creatures crawling around the room. After graduating the High School, he lived for some time in Tokyo, before he moved to Mexico where his father got a job of director of an engineering company. Attending art school, he explored the country and painted and after three years decided to travel, living between Paris and New York, getting know Europe until finally settled in New York City in 1965, where he remained until his death. His famous Date paintings accumulated into Today series are nothing but the date on which the painting was executed written in white letters against a monochromatic background. The first one was made on January 4, 1966, in New York. Every painting represents a unique document of the date and place, considering the language and grammatical conventions of the country where the artist created that artwork, with an exception of the languages that not use the Roman alphabet in which case he used Esperanto.

Always respecting the strict set of rules, Kawara created one painting per day (if it remained unfinished it was destroyed), and each was matched one of eight possible sizes and three colors of the background: red, blue or gray, all horizontal in orientation. The only exception in measurements was made with three paintings created three days when the world was spell bounded by the moon landing. Every date was hand-painted, precisely centered and colored in white, while the background varies. The pieces that have not been exhibited were placed in a box along with a clipping from a local newspaper from that date from the city in which he made the painting. Registering each work in the journal, Kawara marked a One Hundred Year Calendar and applied a sample of the paint he used, to a rectangle glued onto a chart in the journal. The calendar was noted with dots that showed the date of the painting creation and recorded the number of dates since his birth and 48 journals served for the details of size, color and newspaper headline. The artist painted nearly 3,000 date paintings in more than 112 cities worldwide.

Every date was hand-painted, precisely centered and colored in white

I Got Up and Other Information Series

Some of his pieces were more complex in calculations such as Title, where he used a number of dates in the combination with the date the work was executed as his life-dates, in this example number 26,697 (January 27, 2006) which, when calculated reveals Kawara’s birthdate (December 24, 1932). The series I Went and I Met consists of the postcards that he mailed to his friends and telegrams with the message “I Am Still Alive”. This preoccupation with mortality could also be the influence of the nuclear horrors he survived in Japan[2]. The information series I Got Up contained two picture postcards from the place of residence and the other one, I Got Up At, informed the recipient of the time he awoke that day. In the period between 1968 and 1979, he sent numerous postcards (in 1973 alone he mailed from 28 cities) that were reassembled for the exhibition purposes.

Continuing exploration of the passage of time, Kawara began One Million Years in 1969, the year of man’s first landing on the moon and major civil protest against the Vietnam War at Woodstock. Listing each year for the one million-year period and the next million that follows, it has been shown in a form of performance in which two people simultaneously read dates from the Past (1969) and Future (1981) lists. Dedicated to “all those who have lived and died” and to “the last one”, covering the period of 2 million years, these 10 volumes consist of 20,000 pages each. The first audio presentation occurred in 1993 at Dia Center for the Arts in New York as a part of the exhibition One Thousand Days One Million Years. The longest reading happened in 2002 when the performers read the lists for 100 days and two years later, the project has been presented at Trafalgar Square in London where the continuous reading lasted 7 days and 7 nights, making recordings that traveled around the world. This huge masterpiece reminds on the short lifetime within the universal scheme of the human species. Kawara had the One Hundred Year Calendar that noted every day of his life with the yellow dot, starting from his birth, the green dots marked one painting done on that date and the red ones two or more artworks[3].

In the period between 1968 and 1979, Kawara sent numerous postcards and telegrams to his friends

His first show, Nippon Exhibition, has been held at the Tokyo Metropolitan Art Museum in 1953 and was followed by exhibitions at the Takemiya and Hibiya galleries next year. New York audience had a chance to see his work at Dwan Gallery in 1967 and One Million Years traveled in Düsseldorf, Paris, and Milan in 1971. His Date paintings have been a part of Tokyo Biennale (1970), Kyoto Biennale (1976) and the Venice Biennale the same year. Kawara’s first large retrospective named On Kawara – Silence at the Solomon R. Guggenheim Museum installed in 12 sections was held in 2015 and also included a live reading of One Million Years. On Kawara died on July 10, 2014, at the age of 81. His One Hundred Year Calendar noted that he was born on December 24, 1932, instead of January 2, 1933, as was the official date, which puts his death on June 27, 2014. One of his Date paintings, May 1, 1987, was sold at the auction for $4.2 million at Christie's New York in 2014.

The artist is represented by David Zwirner gallery.

Useful Resources On On Kawara