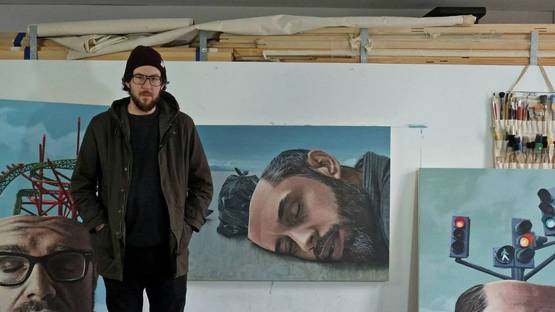 Onur Dinc, simply known as Onur, is a Swiss-born artist with a Turkish heritage. He is active in the street art scene, and also interested in photorealistic field of art and collages.

Onur was born and raised in Zuchwil in Switzerland’s Solothurn canton, in 1979. After leaving school he completed training as a painter, followed by an apprenticeship as a theater painter in Solothurn. Onur then trained as a graphic artist at the advertising agency FAVO in Basel, going on to work in the profession for a year in Bern. In 2007 and 2008, he returned to the theatre, this time in Lucerne. Since 2008 he has worked as an independent painter.

Onur’s recognizable style is created with different materials - besides the classic painting tools, he transforms acrylic rolls and experiments with ultra-violet paint that imprints a futuristic and unique touch to his projects, especially the ones in big scale which are set up in public venues. The artist employs an impressive play of color nuances. Pictures are painted in delineated spaces in a single color, while managing to retain a photorealistic character. Through the use of both matte and gloss mixes of the same tones, an image is created that only emerges in its full detailed splendor when hit by light in a certain way, flashing up as the viewer walks past, and revealing a mysterious outline when viewed from a distance. His collages are constructed with different materials made of paper, such as magazines, newspapers, tickets and even dollars.

In his recent painting series, the artist explores the impact of the present, stressful every-day life to the human psychology, in which he depicts objects like traffic lights, crossroads and garbage bags emerging from heads of an ordinary men. Another interesting example of his work is the painting titled Snowing in Zurich, a piece that shows a lovely view of a snow-covered Zurich. The work gets its message with a realization that the artist mixed real cocaine into the acrylic to paint the snow on the rooftops of the old town of the Swiss city, pointing that the city is one of the world leaders of cocaine consummation.

In 2013 Onur created together with the Swiss artist Wes21 a big work at the 5 Pointz Building in New York City, which gave him a huge publicity. In 2014 he participated the Richmond Mural Project in Richmond, Vancouver. He has worked with the international company Volvo, making one the most famous advertising campaigns of this brand. He has also collaborated with German hip-hop artist Kool Savas, featuring his urban art on Savas’ videos.

Onur is based in Solothurn, Switzerland.