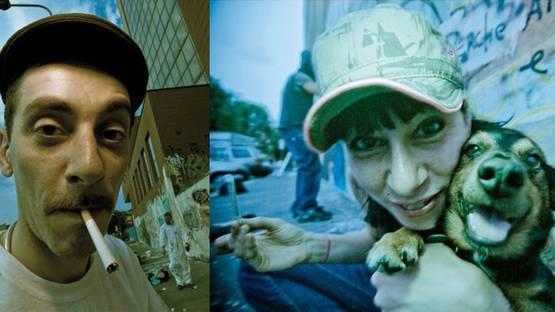 Orticanoodles is the pseudonym for two Italian artists, a very active and tight-knit duo, composed of Wally and Alita. Wally was born in Carrara, where he attended Art School and in 1996 he moved to Milan to attend the course in Advertising Art Direction at European Institute of Design. In Milan, he met Alita. Both in love of the stencil technique, they began to create drawings and handmade posters, quickly making themselves known in the Street art world.

In 2004, they started their first illegal actions in the street, stickering and pasting up posters. In their laboratory, situated in the Ortica district in Milan, Orticanoodles logos took shape. With the subversive power of Zibe, Orticanoodles started a blazing activity in the streets, soon evolving into a real urban guerrilla campaign. The image of the brand Orticanoodles has made its appearance in the streets of main European cities. Currently, the duo is in production, creating a series of portraits. Often, the choice of subject for their work, is made as a form of social criticism and at other times the choice was simply driven by inspiration and respect towards the same. The most recent works, with the new concept Stencil on Stencil, are a collection of portraits of famous leaders, celebrities and provocative artists, combined with intricate matrices of finely cut stencil which contain a written message. The concept is to cancel the physical work, the pictures are above the words, thus creating a mutual relationship between the subject and his message.

To date the duo has painted several stencils autonomously, as a form of free expression on the streets of many cities, and they also participated in important international events and festivals in addition to exhibiting works in museums and private exhibition spaces, both domestic and foreign.