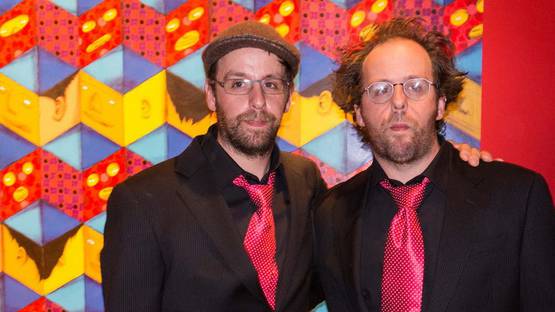 The narrative about special kind of bond between the twins in the work of Os Gemeos represents the base for expressing different layers of creativity and imagination. Namely, behind this name are Otávio and Gustavo Pandolfo, twin brothers who share almost the same pain, joy, and even dreams. Since the artists were both dazzled by the continuous motif in their dreams - a golden hue, they decided to use it in their work. That is how the yellow-faced characters became a leitmotif respectively their trademark. The surreal murals, they became known for, are reflecting their strong belief that street art should beautify the urban environment and has its important social role.

Otávio and Gustavo Pandolfo or Os Gemeos were born in São Paulo in 1974. Although it may seem banal, they have worked together since birth. As children growing up in the streets of the traditional district, they have developed a distinct way of playing and communicating through artistic language. Their family fully supported and encouraged their interest in art and the twins found their way through then burgeoning hip hop culture in Brazil in the late 1980s. Os Gemeos found a direct connection to their dynamic and magical world and a way to communicate with the public.

Peculiar approach to coloring and figuration

Drawn by The Subculture

The twins started out as break dancers and got involved with the graffiti aspect later on. Naturally, their first graffiti steps world attempted to emulate American hip hop pieces, in early New York style. Nevertheless, as the style progressed they have consciously started inserting Brazilian cultural elements and influences into their work. Slowly but surely Os Gemeos began to gain large recognition in the underground urban scene and as their influence spread across the graffiti urban community, they began to help define Brazil’s very own unique style. Stylistically, the artist duo is heavily influenced by the cryptic art of the São Paulo-based pixação graffiti movement as well as American hip-hop, while the subjects range from family portraits to commentary on local social and political circumstances, as well as Brazilian folklore.

Os Gemeos Taking Over The World

Barry McGee helped influence Os Gemeos’ street art and their lives were never been the same after their encounter. During this encounter, McGee shared graffiti techniques and other experience. Soon after, 12oz Prophet Magazine creates an interview on them and Os Gemeos’ fame began to rise. This was the first time their work began to hit audiences outside of South America. Their first solo exhibition in the United States was at The Luggage Store in San Francisco, California in 2003. Two years later, as part of the Dreamland Artist Club project, they painted a 130 foot mural in Coney Island on Stillwell Ave.

The twins transform walls in magical and lively backdrops

Their colorful images adorn buildings in cities including Berlin, Lisbon, New York, Moscow, Athens, Krakow, and in their native Brazil they’ve even painted whole trains—after successfully persuading the authorities to let them do it. Having in mind that Subway systems and trains are often an object of pride in Brazilian cities, and therefore especially well guarded, they were never on top of the list of graffiti canvases (in sharp contrast with graffiti in other countries). But as of the early 2000s, Os Gêmeos were invited to paint the trains legally.

Sometimes they express their ideas through other media

In 2014, the Brazilian graffiti artists partnered up with GOL Airlines to paint a gargantuan mural on the fuselage of a Boeing 737 that would be used to carry Brazil’s team during the World Cup. The plain depicts dozens of portraits, meant to represent the people of the Brazilian culture, rendered in artists’ signature style: elongated faces, quirky outfits, colorful skin and animated expressions. From the tail to nose and the engines, the jet’s technological details and equipment are covered in the vibrant design, wrapping around the massive structure. With an airplane hangar as an art studio, the duo completed the plane piece throughout a week-long process, using about 1200 cans of spray.

The Giants at the Vancouver Biennale

That same year, Os Gemeos were invited to the Vancouver Biennale to turn six multi-story silos on Granville Island into their trademark Giants. The murals are now the largest paintings ever made by Os Gemeos. Six vividly colored 70 foot (23 meters) tall characters are depicted meaning that six silos are wrapped all the way around, giving it a total area of 23,500 square feet (7,200 sq meters). These cartoonish giants are also a part of Os Gemeos’ on-going Giants mural project, parts of which have already brought life and color to many other major cities around the world.

Latest Projects of The Twins

Within Italian project Outside the Cube, dedicated to Street Art and other forms of art connected to the urban and public contexts, Os Gemeos realized their first major mural titled Efêmero. By drawing the inspiration from the history of the local site, where train locomotives were built during the twentieth century, this work recreates the silhouette of a city train on a monumental scale. The latest solo exhibition Silence of the Music at Lehmann Maupin gallery in New York was conceived as a site-specific, where each of the five rooms had a unique selection of paintings and objects covering the walls, from the floor to the ceiling.

The most famous graffiti artists from Brazil

Throughout the years, guided mainly by their intuition, Os Gemeos explored with dedication and care various techniques of painting, drawing, and sculpture, and had the street as their studio. They are today recognized and admired both nationally and internationally, the artists utilize this combined visual language, improvisation and a sense of playfulness to intuitively create a variety of projects worldwide. Through the last decade or so, they have gained international fame, displaying their work in exhibitions in Cuba, major cities in the U.S. and Europe, as well as numerous shows in their hometown of São Paulo and throughout Latin America.

Featured image: Portrait of Os Gemeos - image courtesy of Arrested Motion
All images are used for illustrative purposes only