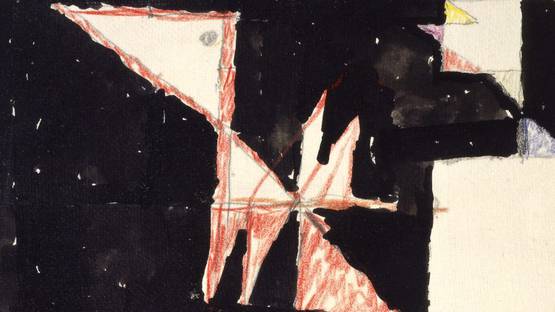 Osvaldo Licini was an Italian abstract painter born in 1894 in Monte Vidon Corrado, a small village in the Marches, in the then province of Ascoli Piceno. He grew up away from his parents (his father was a designer and his mother an editor of a fashion house), who entrusted him to the care of his grandfather Filippo. He completed his primary studies mainly dislocated between his native country and the city of Fermo. In 1911, he enrolled at the Academy of Fine Arts in Bologna, from whom he received his degree in 1914. Later he moved to Paris where he found inspiration in the paintings of Henri Matisse. In his twenties, Licini started painting pieces inspired by the post-impressionist landscapes and Fauve - his first exhibition dates back to 1914, in the Hotel Baglioni, Bologna. The '40s marked the approval of a surrealism by Nordic influences (his wife was Swedish). Osvaldo Licini spent his entire life in Monte Vidon Corrado, Italy.