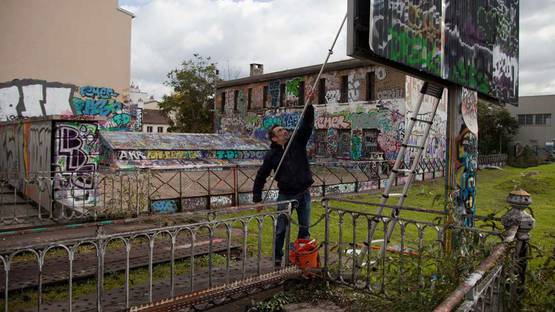 French artist OX, also known as the hijacker of billboards, has a brave goal to ruin the commercial messages found in the large advertising spaces by infusing his irresistibly clever sense of humor. Nowadays, it is basically impossible to spend even one day without seeing various large-scale billboards, positioned in the busiest areas such as major highways or pedestrian zones. While their original purpose is to convince people to buy a specific product, Ox’s goal is to brighten up our days by incorporating his minimalist, humorous imagery into billboards, which are his favorite canvases.

The Beginnings of Street Art

Ox was born in the north-central France and became active as an artist in the early 1980s before the actual concept of street art became widely known. He was getting prepared to become an advertising designer, but he changed his mind and decided to formally learn painting, silkscreen and video, so he enrolled in the Arts Déco School in Paris. During his studies, he assisted the publishing of the Blank graphzine which featured the band Lucrate Milk, popular at the time. Ox's early work includes print and photocopy as well as live painting during rock concerts. The artist invented his signature consisting of two reversible and symmetric letters O and X as soon as his work became more visible in public. The most decisive moment in Ox’s early career was meeting Jean Faucheur, whose work is based on large paintings which he transfers onto billboards. OX was impressed by Faucheur's concepts and he decided to use the same approach in his own art. He wasn’t the only one dazzled by Faucheur’s work – together with a couple of like-minded artists, OX has formed the circle called Les Frères Ripoulin. They were inspired mainly by Pop Culture and their style was raw and impulsive, inducing a sense of parody.

The most decisive moment in Ox’s early career was meeting Jean Faucheur, whose work is based on large paintings which he transfers onto billboards

OX has participated in a few group shows with Les Frères Ripoulin, before he decided to concentrate on his own projects and start working alone. He developed the distinctively minimalist and humorous visual language and his famous series of works called Affichages is the best example of such language. OX's amusing pieces from this series feature the abstract structures which look like as if they want to escape the frame of a billboard and break free. The artist's public interventions make billboards appear more natural – he is trying to blend them with their environment, through the use of optical illusions and colors that mimic the already existing patterns in the billboard or its immediate surroundings. OX is using prevalently paper cut outs, roller, and glue, in order to turn aggressive or boring ads into creative and colorful artworks. In his exciting career that lasts over three decades now, OX has made a huge number of public interventions in Paris as well as in other major metropolitan areas.

OX is blending billboards with their environment, through the use of optical illusions and colors that mimic the already existing patterns

OX has gained a stronger international recognition from 2000’s onward. His street art became viral thanks to the internet and social networks – back in the 80s, it was impossible to spread photographs so effortlessly as nowadays. Even though OX’s early work had a relatively short lifetime, today, thanks to the online display billboard, the artist has finally achieved the popularity he clearly deserves, since he is one of the most inventive European street art pioneers. OX is still an active artist and his work is regularly exhibited in group and solo shows in Europe and in the United States.