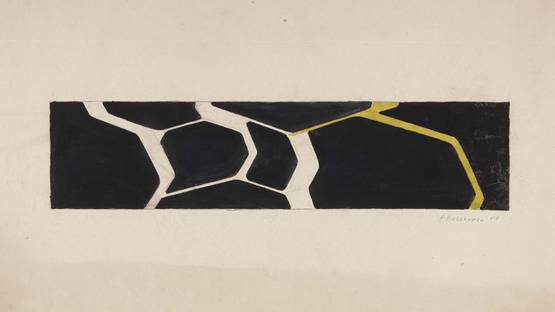 Pablo Palazuelo was regarded as one of the preeminent Spanish artists of this century, known for his paintings, sculptures and writings that should be conceived of as a coherent whole. He is best known for his large-scale geometric abstract paintings and melted bronze sculptures.

Palazuelo was born in Madrid in 1916, where he lived and worked until his death in 2017. He studied architecture in Madrid and later at the School of Arts and Crafts. His work was exhibited in many solo and group shows. Palazuelo received several awards for his work, including the Fifth Carnegie Prize and Spain's National Award for Plastic Arts. His works are in the collections of the Art Institute of Chicago, the Guggenheim Bilbao, and the Museo Reina Sofia in Madrid.

After receiving the Kandinsky Prize in 1952, Palazuelo delved into his self-titled movement "Trans-geometría," or how to translate nature's organic rhythm into plastic art. He was deeply influenced by his studies in architecture and curiosity for ancient philosophy – the Pre-Socratics in particular – contemporary physics as well as hermetic and oriental thought. Number, drawing, line, plane, space and color served as primordial elements in his creative oeuvre at the service of geometry. Often composed of two-tones, his paintings depict the phenomenal conflict between flat planes of color and line.