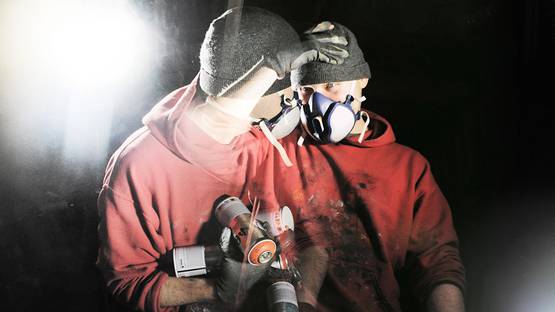 As a form of artistic practice, street art definitely gives the most opportunity for a wide audience to witness the artwork, with the whole city being allowed into this “gallery in the open.” However, many of these works are put there just for the sake of it, standing as visually enticing to most, but no more than that. One artist sees the streets as an opportunity to do more than simply display an artwork, and though you wouldn’t be blamed if you’d miss them altogether, Pahnl’s often miniature stencil pieces of street art adorn the streets of England and wider, interacting with the environment rather than simply being “stuck” on a street wall. Embodying the very meaning of “street art,” his tiny dogs, birds, cats, and people often tell a tale that brings a smile to anyone’s face, succeeding in the artist’s initial intent.

The Oxford-based artist going under the pseudonym of Pahnl has been in his line of business for over a decade now, starting out by creating art in his spare time. It took him nearly ten years to build his practice up into a full-time activity, advising the new coming artists not to rush the process either. Today, his stencil creating is at a surgical level of precision and he cuts the small heads, limbs, and other detail with an amazing speed to his hand movement, doing it almost automatically. With a lot of work being thrown his way, he uses his technical skill to his advantage, forming narratives out of tiny people, animals, even robots, easily amusing and drawing attention.

Pahnl's stencil creating is at a surgical level of precision

A City at the Palm of My Hand

Creating mostly figures of people and animals no more than 10 cm tall, Pahnl has used more than just stencils to bring these little “storytellers” to life: stickers, posters, film, and photography are all a part of his arsenal and Pahnl uses each one with an uncanny sophistication in order to get the narrative across. Though there are certain perks to making such small figures, the artist mostly does it for his own liking of the format and it certainly has allowed him to display quite a unique debut show in 2013. Stenciling directly onto the London’s gallery walls, he had created a whole city filled with these small inhabitants with a literal newspaper to follow up on all of the stories they had to tell. Doing much of the same thing in the streets across England, as well as Australia, Canada, Germany, Russia, and other countries across the world, Pahnl sees the open, clear “slots” in the city walls as panels for his characters to fill.

Stickers, posters, film, and photography are all a part of Pahnl's arsenal

Comic Panel of the Streets

Composing his pseudonym out of “panel” (comic panel), Pahnl truly stands out as a representative of the street art. Drawing a reaction with his stencils, the work he does nudges the everyday routines of those who see them in the right direction, leaving a lasting impression. Inspired by artists from various fields of business, he likewise portrays a myriad of different narratives in his practice told through the eyes of tiny people and animals. Always interesting to see, we can but hope to come across some of his work as we walk the streets of our city.