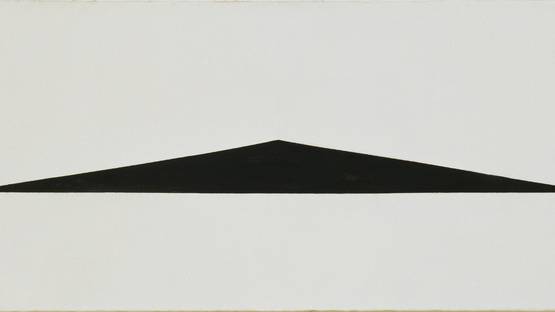 Palermo, born Peter Schwarze in Leipzig in 1943, was a visual artist and painter who worked with a variety of media in a Modernist style. Adopted as an infant with his twin brother, Michael, by foster parents named Heisterkamp, he became Peter Heisterkamp, and moved to Münster in 1962. His work is often characterized by geometric shapes and vibrant, saturated colors. In 1962, Palermo began studying art at the Kunstakademie Düsseldorf, where he worked with the artist Joseph Beuys. In 1964, he took on the name Blinky Palermo, after the American alleged Mafioso. Blinky later became his nickname, Palermo was his chosen artist name. He began to exhibit his artwork in 1968 in Germany, and after traveling to New York with fellow painter Gerhard Richter in 1970, he set up a studio there in 1973. Palermo incorporated an array of materials into his work.

In 1964, Palermo began to create a series of compositions called Stoffbilder (Cloth Pictures), which involved sewn strips of brightly colored, store-bought fabric attached to a canvas stretcher. In the late 1960s, he created murals (since destroyed), which were meticulously planned and recorded through preliminary drawings and photographs of installation space. Both reminiscent of and a departure from the Stoffbilder works, he began a series of paintings in 1972 called Metallbilder (Metal Pictures), by applying acrylic paints to steel and aluminum. In 1976, Palermo created what would be his last work, To the People of New York City, as a tribute to his home at the time.

The artist died suddenly in 1977, at the age of 33, while traveling in southwest Asia. Binky Palermo’s work was exhibited in more than 70 shows before his premature death. Retrospectives of his art have been held at the Kunstmuseum Winterthur, Switzerland in 1984, the Kunstmuseum Bonn, Germany in 1993, and at the Hirshhorn Museum and Sculpture Garden in Washington, D.C. Public collections holding major works by Palermo include the Museum of Modern Art in New York, the Tate Gallery in London, and the Dia Art Foundation. Most of the artist's work, however, remains in the possession of private collectors and museums in Europe.