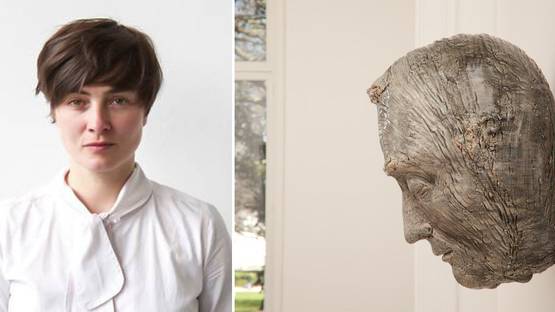 Paloma Varga Weisz is a German contemporary artist, recognized by her diverse oeuvre which includes sculptures and installations mainly in wood and ceramics, as well as watercolors and drawings.

Varga Weisz was born in 1966 in Neustadt an der Weinstrasse, Germany. She was trained as a woodcarver from 1987 till 1990 in Garmisch-Partenkirchen. From 1990 to 1998 she studied at the Staatliche Kunstakademie Düsseldorf under Tony Cragg and Gerhard Merz.

Deeply rooted in the arts and crafts of the Middle Ages, Varga Weisz’s works embrace many of the inner aspects of its style and subject matter, creating evocative works that recall folklore, contemporary media and art history. The hybrid forms that she shapes by this fusion of influences are reminiscent of our cultural, mythical, or religious history and simultaneously enclose adult knowingness and youthful innocence, as well as personal reference and collective memory. Her sculptures are characterized by obvious references to traditional iconography and handcraft, joining the historical with a contemporary artistic practice that only rarely reveals its genealogical roots.

Her expressive and often disquieting works have the ability both to charm and unsettle. Each work captures a moment of metamorphosis or transformation — between sleep and death, male and female, real and unreal. The delicate balance between restraint and exaggeration is also felt in her watercolor paintings which reveal an immediacy and freedom that is equally captivating.

The unequivocal titles employed by Paloma Varga Weisz for her sculptural works, such as Dogman, Bumpman, Boxman, belie the complex nature of the pieces she presents to the viewer, hiding the strong sense of narrative apparent in the work, as well as the subtle feelings which are evoked by her silent figures. Bruised and scratched by fingertips and nails, her figures are un-smoothed, not fully formed and intentionally not quite made. The objects that her silent figures hold appear to be components of a memory or personal story, strung together in order to construct a narrative. The figures are partly realistic, partly out of focus, and like a strong memory, they are temporally disconnected from the space in the present but continue to have a physical impact on it.

In developing her sculptures Varga Weisz is influenced by her physical working method and the many visual and literary sources that she encounters during this time. The figures emerge gradually as she moves from the exterior to the interior both in a physical sense through carving the wood, and in a conceptual sense as her ideas crystallize from one step to the next. She is keen to establish and maintain a distance between the viewer and any literal meaning, preferring them to bring their own associative ideas to bear on her work, causing her sculptures to remain stubbornly enigmatic yet strangely familiar.

Varga Weisz had numerous group and solo exhibitions worldwide, a large part of them in Germany, England and New York. In 2012, six of her drawings were acquired by and exhibited in the Museum of Modern Art.