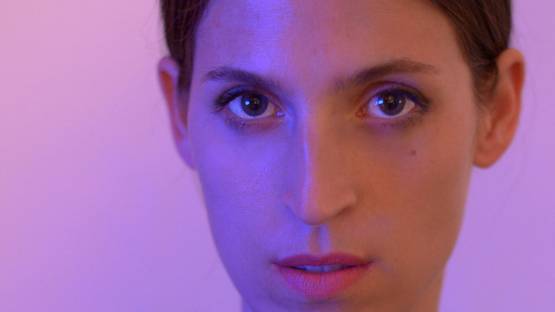 Through painting, sculpture, and installation, informed by extensive research into fields ranging from marketing and medicine to philosophy and religion, Pamela Rosenkranz, a Swiss artist, addresses the fundamental questions about what it means to be human in today’s world. During the process of taking up the topics of contemporary issues and phenomena of everyday life, she adds a unique and personal touch, reducing them to absurdity using humorous turns, succinct and illogical short-circuits and poetic entanglements and at the same time cuts right to the chase. Often playing with narrative juxtaposition, Rosenkranz is known for using widely known commercial brands in her creation, for example, the exhibition The most important Body of Water is Yours is focused on the topic of water and built on the brand Evian.

Born in Uri, she completed her MFA at the Academy of Fine Art in Bern in 2004, and broaden her education by studying at the University of Zurich, Department of Comparative Literature, before enrolling into the Independent Residency Program at Rijksakademie in Amsterdam. Ever since her work was included in the 2013 show Speculations on Anonymous Materials at the Fridericianum in Kassel, it has been linked with Speculative Realism (without a fixed definition of the philosophical school, it could be said that it is concerned with understanding the relationship between people and objects - the material world - without reference to traditional humanistic ideas about subjectivity). On being labeled like this, the artist stated: “I try not to think about art in terms of the primacy of subjective interpretation, but to engage instead with the reality of materials beyond our affective engagement with them. Speculative Realism is a vague umbrella term and I don’t see my work as exemplary of it in a direct way. I am just interested in engaging with philosophers who incorporate contemporary ideas in their theories.”[1]

Pamela Rosenkranz at the Venice Biennale

The artist was chosen to represent her country at the prestigious exhibition, and yet, consistent with the ideas behind her works, Rosenkranz said she represented no country, but rather: “I am interested in what it means to be human. How do we see? How does our biology, our history, our bodies affect our perception, our understanding of ourselves and the world?”[2] She filled the Swiss pavilion at the Venice Biennale 2015 with an immersive installation that activates the knowledge mobilized in the technological, scientific and conceptual development of products, subverting the culturally consolidated meanings of art. The chosen materials – Viagra, bionin, evian, necrion, silicone – were familiar to viewers more for the esoteric promises that some of them are embedded with, than with the physical substances which they are actually composed of. However, their apparently pure and timeless aesthetic qualities they emit, have a biological basis. All encompassing, Rosenkranz's work penetrated all parts of the Swiss pavilion’s architecture with smells and sounds. The synthetic sound of water, generated by a real time algorithm, reverberated throughout the atmosphere, while the scent of fresh baby emanated, invading all of the visitors’ senses.

The Importance of Scientific Research

Construed as sharply critical, Rosenkranz's work debunks certain ingrained notions about human life. She is interested in exploring how findings based on science can change popular conceptions of what it means to be a human. For example, the advances in neurosciences challenge the very understanding of identity, with new scientific research into the evolutionary history of the brain, we can understand the self not as a fixed entity but as an ever-changing process. She conducts her research mainly by reading online. Reading papers and books and having conversations is certainly great, but online research is the greatest resource, as it keeps up with the pace of the speculative investigation.