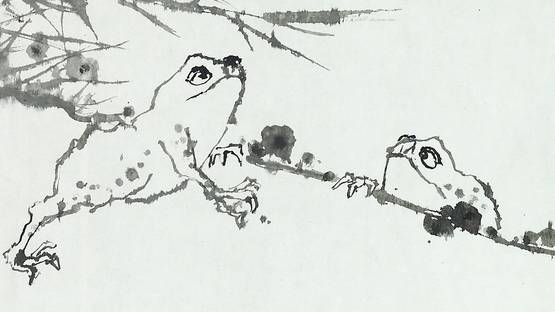 Pan Tianshou is considered to be one of the most important traditional Chinese painters of the 20th century, and a pioneer in the development of traditional painting education. Born in 1897, in Guanzhuang, Zhejiang province, Pan studied at Zhejiang First Normal School in Hangzhou. Largely self-taught, Pan studied the works of Xu Wei, Bada Shanren, and Shi Tao. Like most students of the time, he participated in student parades and shared the revolutionary spirit of the May Fourth Movement in 1919.

In 1923, Pan and Zhu Wenyun established China’s first department of Chinese painting at the Shanghai School of Fine Arts. A year later, he began writing the book The History of Chinese Painting, which was later published by Commercial Press.

Under the pressure of tremendous Western influences on Chinese painting development, Pan was concerned about the conflicts and interchanges between foreign and traditional elements in Chinese painting. To this end, in 1932 he and his friends set up a traditional Chinese painting society, Bai She (“White Society”), which aimed to develop Chinese painting in the reforming spirit of the Eight Eccentrics of Yangzhou of the Qing Dynasty. He argued that Chinese and Western art were derived from two totally different perspectives and therefore should remain distinct, any compromise between the two would weaken each tradition’s unique nature. In his own teaching, he included Chinese traditions of calligraphy, seal carving, and literature. After 1949, art academies of the new China adopted the style of Socialist Realism, and Pan’s insistence on the traditional inheritance became unpopular.

His style took shape in the 1940s and gained full maturity in the mid-1950s. Artist successfully integrated the traditional subjects of flower-and-bird painting and landscape. Like Wu Changshuo, he applied the aesthetics of calligraphy and seal carving to his painting; but, unlike Wu, he adopted and advanced the forcefulness and heaviness of the Zhe School. His compositions were often dynamic, seeming to balance extreme opposing forces and thus evoking a feeling of danger. His brush was powerful and expressive, inducing a sense of thrill in the viewer.

In 1962 Pan held an individual exhibition at the newly founded Chinese Art Museum in Beijing, exhibiting 90 works of painting, seal carving, and calligraphy. During the Cultural Revolution, Pan, along with many of his peers, experienced persecution at the hands of the Red Guard, and was denounced as a spy. He died in Hangzhou in 1971.