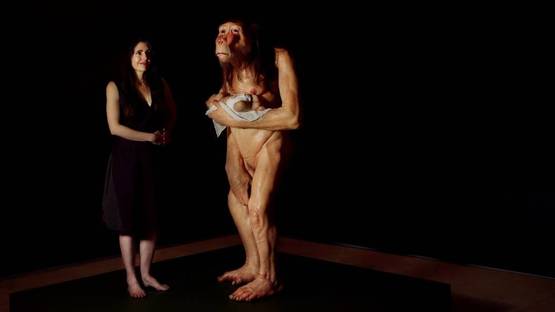 Art holds the power to shape the existing, but also to create new worlds. Vision and hand of a skillful master can design entire universe and inhabit them with the most extraordinary life. Patricia Piccinini is an Australian contemporary artist who creates the world that exists somewhere between the one we all know and the one that is almost upon us. Often with a terrifying appearance, her work is neither imagined as the nightmare future environmental ruin, nor the brave new world of errorless scientific process. Instead, she focuses on the internal, emotional lives of the every new creature that might emerge and begin its life, but also on the questions about the kinds of relationships that might come to light alongside them. These creatures are unsettling and strange, yet not threatening. When the first impression of terror passes, all that remains is their vulnerability, as they plead with us to look beyond their figures and accept them as they are.

Piccinini’s art process always begins with a drawing, a medium best suited for developing ideas. When she feels that the initial idea is starting to become something worth making, thoughts about how it might be made are born. The medium tends to come as she starts to think about the best way to express a particular idea, whether that is photography, sculpture or a more resolved sort of drawing. Sometimes, there is some sort of materiality that she wants to work with – other times the focus is on how to best connect the viewers with ideas. Fabrication is the next step. Because of the nature of her art, almost everything is done in the studio, with the exception of automotive painting and foundry work. Since Piccinini is an artist but not a technician herself and therefore not particularly wedded to any of the processes, she works with a small team of amazing technicians. Together, they work from her ideas by employing a wide array of techniques that they have gotten very good at. Some of them are pretty much standard skills, while others have been developed by the team. Depending on what seems as the most appropriate and what works best, they can use traditional skills such as hand sculpted plasticine models, as well as computer-based techniques like CNC and 3D-printing.

Her work always begins with a drawing

Born in Freetown, Sierra Leone, Piccinini moved to Australia in 1972. She received a BA in Economic History from Australian National University, Canberra, in 1988, and a BA Painting from Victorian College of the Arts, Melbourne, in 1991. At the beginnings of her career, she would spend a considerable amount of time in medical museums, making drawings of preserved specimens. These studies of aberrations of anatomy and pathologies influenced greatly her later work, especially in sculpture. Today, she is one of the most acclaimed artists in Australia, whose work and exhibitions are very popular. By using silicone, fiberglass, even human hair, the artist makes sculptures that appear familiar, yet hyperrealistic. Piccinini's depictions of possible future species and their interaction with us, the human beings, serve as a brutal reminder that we can somewhat manipulate evolution and life, but we’re still far from being in control. Her search for information regarding the future involves creating seemingly dark arts and sculptures, which are in reality quite benevolent.