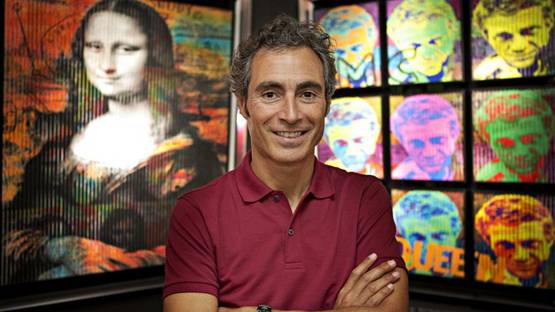 Patrick Rubinstein is a French contemporary artist, famous for his diverse style that represents a mixture of paintings, photos, images, and portraits. As someone who works on the concept of the Opt Art his creations are actually optical illusions and games that offer multidimensional views, depending on the angle. At the same time, juxtaposing vibrant colors combined with black and white cause multiple emotions and reactions such as happiness and brightness. The movement and change in all his works confirm his statement that he doesn’t like static art. He succeeds to make images look alive, by developing kinetic universe, with the help of Surrealism, street, pop art, and Renaissance.

The artist was born in 1960 in Paris, the time when Beatles, Brigitte Bardot, and Jackie Kennedy were popular. Since he was five years old, his avant-garde parents introduced him to gouache, and at the age of eight to Super 8 movie. Rubinstein was also engaged in the family fashion business, which he saw as a process of self-exploration, by taking challenges and getting new ideas every day. The vast spectrum of people that influenced Patrick’s art includes Pablo Picasso, Andy Warhol, Henri Matisse, Salvador Dali, Leonardo da Vinci, Yves Klein, Philippe Pasqua, and Arman among others. His drawings and sculptures combine distant worlds, creating an unexpected dialogue, like the piece Love, in which he mixes the Mona Lisa, Marilyn Monroe, Betty Boop, Charlie Chaplin, Basquiat, and Michelangelo.

Rubinstein was also engaged in the family fashion business

Patrick is focused not on the process itself, but rather on what the work represents, and which emotions it triggers. After father’s death in 2006 he was determined to revitalize childhood memories and craft, so in the next three years, he perfected his skills until achieving his signature technique. He mastered the approach in which he combines two or more psychedelic contrast images into one portrait. Rubinstein’s themes are motion based, and his primitive methods that included scissors, photos, and cardboard evolved during the years. He began by making comedic portraits of his family and friends, but later the digital era allowed him to start making three-dimensional art which plays with viewers perception. In this way, the author opens the door of his imagination to the outer world.

Icons in his Art

Patrick usually includes symbols of American culture such as Michael Jackson, Mick Jagger, or Elisabeth Taylor, but also Martin Luther King, 20th-century influential figure. Kinetic or Opt art has roots in the works of Marcel Duchamp. Yaacov Agam, Carlos Cruz-Diez, Julio Le Parc, Victor Vasarely are some of the masters that guided him through his exploration of the Optical art. In 2013 the artist was ranked 89th among the top 100 French artists. His works are part of collections of people like Formula one team owner, South Korean rock star, and Saudi businessman. In 2014 his pieces were exhibited in places like the Opera Gallery in Seoul, the Shanghai exhibition center, or the Copelouzos Family’s Museum of Art in Athens among others.

He is represented by the Galerie Perahia.

The artist lives and works in Paris, France.

Featured image: Patrick Rubinstein - Portrait - Photo via prestigeonline.com
All other images courtesy of the Galerie Perahia; All images used for illustrative purposes only