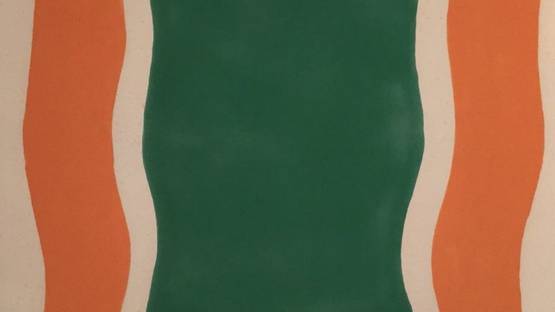 An artist and head of the Bennington College Art Department during the 1950s and early 1960s, Paul Feeley was an instrumental figure in the rise of Bennington, Vermont as a cultural outpost for the New York art world.

Born in 1910 in Des Moines, Iowa, Feeley moved to New York to pursue his studies in 1931. He studied portrait painting with Cecilia Beaux, figure painting with George Bridgeman and Thomas Hart Benton, and mural painting from 1931-1934. In fact, in 1934, Feeley joined the Mural Painters Society of New York and became increasingly engaged with mural projects. From 1934-1939, he would teach at the Cooper Union, where he'd later become the head of industrial design. In 1940, he would join the staff at Bennington College, where he was fundamental in establishing its art department. “Paul had enormous vitality,” recalled Helen Frankenthaler, one of his best students. “I mean, his whole style was energy, curiosity, appetite. Everything interested him.”

During the mid-1950s, Feeley produced Abstract Expressionist–inspired paintings, moving to organic figure-ground compositions from the late 1950s and early 1960s, and the diagrammatical compositions that preoccupied him from 1962 until 1966. He painted simple geometric forms, deployed singly or in repeating groups, ranging from upright barbell or baluster shapes, oblongs that resemble peanuts, small solid-looking arches and wavy-countered squares and rectangles.