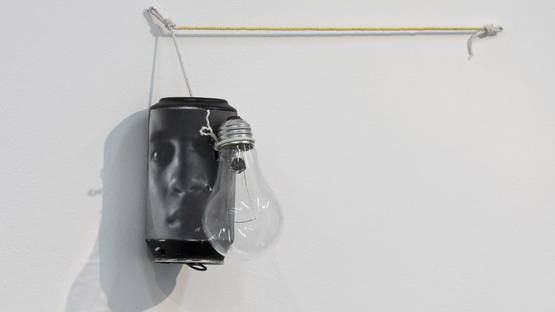 Paul Lee, born in Ilford, London, in 1974, is a British artist who works in painting, sculpture and collage. His raw materials are an array of found objects such as light-bulbs, cans, rocks and towels, which he then cuts up, paints over, or reassembles.

Lee studied at St Martins School of Art and then Winchester School of Art, where he received his BA in Fine Art in 1997. He works with a single motif in exhaustive variation. In one series “Untitled (Can Sculpture)” from 2007, all of the works have in common a soda can with a photocopy of a young man’s face in the place of the label, sourced from a 1970s nudist magazine. His unspoken narratives investigate the meaning and conquest of desire, using a language that is and on the verge of absence, a mark via the form of a trace, a trace that wipes away any particular subjective resonance, appointing it in another form.

Paul Lee is represented by Stuart Shave/Modern Art in London, and Maccarone gallery, in New York. He was artist in residence at Chinati Foundation, Marfa, USA in 2007. Lee has had numerous gallery and museum exhibitions, including at Walker Art Center, Minneapolis, USA, Stuart Shave/Modern Art, London, UK, Portikus, Frankfurt-am-Main, Germany, Alberta Merola Gallery, Provincetown, USA and Paul Kasmin, New York, USA, to name a few. Public collections include The Dallas Museum of Art, The Walker Art Center, RISD, and The Morgan Library, among others.