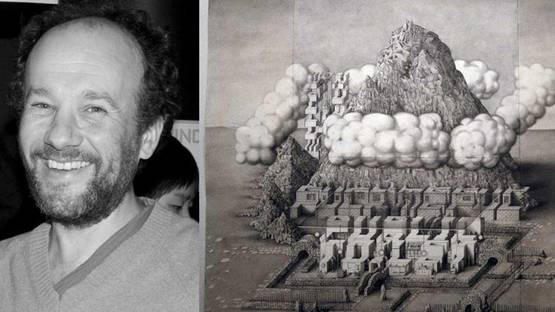 Paul Noble is a British artist known for the tones of his graphite drawings on paper that were greatly influenced by the gray skies of the coastline along the north-east of England, and often depict the labyrinths of microcosmic cities and detailed urban landscapes. One such example is his narrative drawing project, Nobson (1996–2011), a series of magnified renderings of the topographies of the fictional Nobson, Newton, and its monuments, which together form a parallel world.

Between 1988 and 1998, Noble was involved in the London artists’ space City Racing, where he also showed several times. Thereafter, he exhibited his work at the Cubitt Gallery, the Chisenhale Gallery, the Institute of Contemporary Art, the South London Gallery, the Tate Gallery, and the Whitechapel Art Gallery, all in London. He has also exhibited at the Museum of Modern Art and White Columns, both in New York, NY; the Museum of Contemporary Art, Los Angeles, CA; the Fabric Workshop and Museum, Philadelphia, PA; Museum Boymans van Beuningen, Rotterdam, Netherlands; the Migros Museum, Zurich, Switzerland; and Forde Espace d''art Contemporain, Geneva, Switzerland. Noble was a part of the 8th International Istanbul Biennial in 2003 and Manifesta 3 in 2000. He is included in the collections of The British Council, London, England; the FRAC des Pays de la Loire, France; the Museum of Modern Art, New York, NY; and the Tate Britain, London, England. Noble is currently represented by Gagosian Gallery in New York City. Noble was a 2012 nominee for the Turner Prize.