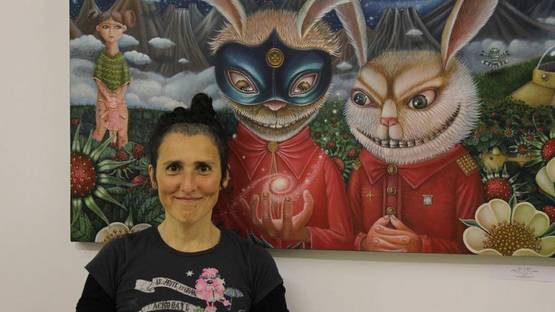 Argentinian artist Peca is a painter, illustrator and stop motion movie maker who works in the field of pop surrealism. The artist uses an array of materials and surfaces to create a surreal cosmos full of mystical subjects and usual situations. The main characters in her work represent furry wide-eyed creatures on a continuous quest of exploring the universe. Though placed in the galaxy beyond human reach these subjects still remain close to earth and reveal some of the artist's personal experiences, thoughts, and emotions. By continuous wondering trough celestial universe of strawberry fields, fantastic oceans, and surreal landscape the characters convey the human spiritual need to connect with the world and other living beings who reside in it.

Peca was born in Argentina and graduated Fine arts at the University of La Plata city. Her childhood was marked with the military dictatorship in her country and the artist quickly turned to music to find refuge from the circumstances that surrounded her. Her love for music drove her to enroll in piano classes but on the second year of her studies Peca made a crucial shift in her education and decided to study engraving instead. In 2001 the she moved to Barcelona, Spain.

Peca's celestial universe is made of strawberry fields, fantastic oceans, and surreal characters

Peca's artistic process is rooted in introspection. She creates her paintings by transferring visions that appear in her dreams and meditations to the canvas. While creating her unearthly art pieces and fantastical creatures, Peca is known to use an array of mediums including oils, acrylics, and pencils. Her choice of surfaces is equally versatile and her paintings speak as loudly on wooden boards and large walls as they do on prints, canvas works, and sketchbooks. Before starting to work on her art series the artist looks deep into her subconsciousness that let her connect to the universal organisms that she later portray on her paintings.

Her unusual multilayered furry characters represent spiritual entities that are in continuous search. They cry birds from their numerous eye, shoot galaxies from their mouth and when hurt, bleed strawberry juice. The characters are set against a variety of backgrounds that each contain their own unique symbolic. A strawberry field, for instance, represents the artist's childhood and the endless possibilities it carries. The blue skies, on the other hand, represent the enigma and the possibility of a miracle. Peca's Lowbrow surreal artworks traveled all over the world and were exhibited in various venues in USA, Germany, and Australia.