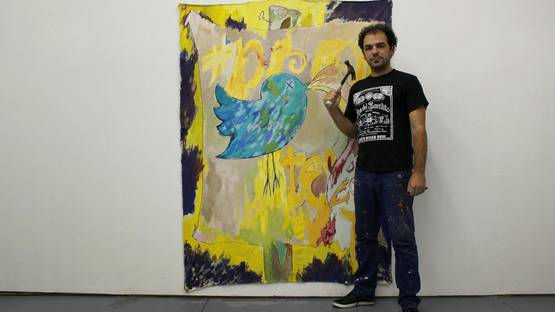 Pedro Veléz is a Puerto Rican artist born in 1971 in Bayamón, a town located in the northern coastal valley. His oeuvre comprises painting, large-scale wall collages, web-based works, and sculpture. Veléz received his Bachelor of Arts in Communications at the Universidad del Sagrado Corazón (USC) in Santurce, Puerto Rico, and his Master of Fine Arts at the School of the Art Institute of Chicago.

His work combines art criticism and journalism, creating “visual essays”. His visual essays consist of paintings, photographic collages, limited edition posters and postcards, which resemble movie posters. He uses text in his works, based on Twitter hashtags. Veléz's work adopts a multidisciplinary approach, which offers the commentary on a variety of issues, such as race, politics and aesthetic concerns. He is known for producing fake exhibition announcements and posters.

For many years, Pedro Veléz has contributed criticism to Newcity’s art section, as well as to Artnet Magazine. His work has appeared in many publications including the New York Times and The Miami Herald.

The artist is based in both New York and San Juan, Puerto Rico.