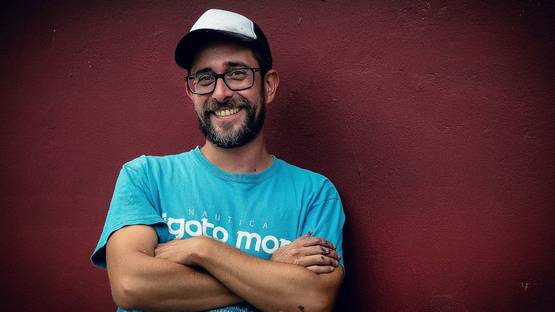 Manuel di Rita, better known as Peeta, took on an endeavor to break the generic typographical form of letters, by stylizing them with shape and volume, rendering more than just their mere semantic function. His main inspiration is letters forming his own moniker. As language is an alive form of communication, never still, always fluctuating and evolve with people, Peeta brings his lettering into the fluidity of the urban environment. Here, words are ruptured from their histories, readapted and reformed. This change of history of a letter is transposed to the fusion between traditional lettering and three-dimensional style that gives this artist a unique style and a kind of visual rhythm.

It is inevitable for the artist to convey his own personality through his work. In the case of Peeta, this happens through his work with a three-dimensional painting that hides a spiritual side of the artist. In the midst of technical and formal perfection, lay shades of color and perceptive tricks. The latter being an essential part of a progressive disclosure of the artist’s own personality, implicitly mediating his own will to understand and describe his ego.

Peeta discloses his personality through shades of colors

The Artist Emphasizes the Human Perception

The artist plays with the letters of his moniker, as an attempt of making a self-portrait. His plays with perspective and concept of dimension aim at revealing the deceptiveness of human perception. Shifting fixed points of view with visual tricks serves to emphasize the fallacy of the human perception of the world, in an attempt to grant a three-dimensional semblance on a pictorial representation, ultimately revealing the will to deceive.

The artist plays with perspective and dimension

Peeta has been a graffiti artist since 1993, and he is a member of the EAD crew in Padova, Italy, FX and RWK crews in New York City. He has participated in graffiti jams and Meeting of Styles events across Europe and the Americas. The Italian artist isn’t just a graffiti artist, but also a sculptor, as his pieces explore the potential of sculptural lettering, similar to his street art and paintings.His PVC sculptures start as a 3D design in a software that allows him to have a three-dimensional view of the sculpture and virtually cut out all the surfaces as he considers his pieces on a 2D plane. Peeta also explores his field of interest on canvas.

Peeta is also a sculptor, exploring the potential of lettering

Perfectly understanding shapes and size of any material of his choice, thanks to the 3D program, Peeta builds his sculptures. He cuts the PVC plates and assembles them together, coating the surface of the sculpture with a polyester layer. This allows him to mask the imperfections resulted from the building process, and also to allow singularity to the structure. Besides the PVC, Peeta has acrylic resin and fiberglass sculptures as well as bronze, which are created using investment casting technique.

Peeta lives and works in Italy.

Featured image: Peeta - portrait
All images courtesy of the artist