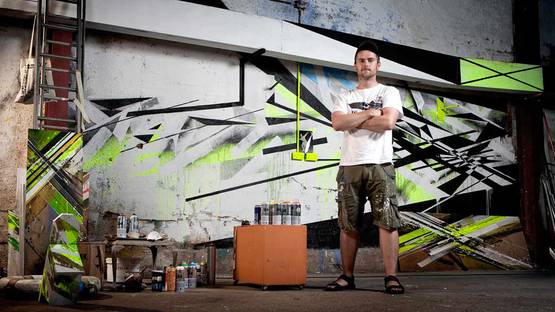 Bartek Świątecki aka PENER is a Polish artist whose work ranges from paintings on canvas and walls, over animation and site specific installations. Bartek Świątecki’s work mixes abstraction and traditional graffiti. High art and youth culture, modernism and skateboarding. His images are based around geometric groupings and angular forms which reference futuristic architectural design. The apparent slickness of Świątecki’s productions is often at odds with the decayed settings the works are placed in. The visual language used in these pieces gives a glimpse in to a brave new world of graffiti and fine art cross over. It’s a world where graffiti writers are as happy to quote from De Stijl as they are Wu Tang.

PENER was born in 1981 and currently works as an art teacher in Olsztyn, Poland. In 2006 he graduated from the faculty of Fine Arts at the University of Nicolaus Copernicus in Toruń. He first came in contact with the street art scene around in 1995 when he tagged his name all over his city. PENER then later started to form his own style, which is characterized by graphical minimalism: straight lines and pure colors are combined to create geometrical clusters. Interestingly, PENER often breaks with the cleanness of his structures and lets the paint pour out of the shape or splatters paint onto them. This gives his pieces a strange liveliness and especially in an urban environment, integrates them well. It seems as if the dirt and dust from the streets affect the pieces actively.

PENER’s first self-published book ‘Deconstruction’ has been released in 2013. He has been a part of a broad range of exhibitions across Europe, especially in Poland.