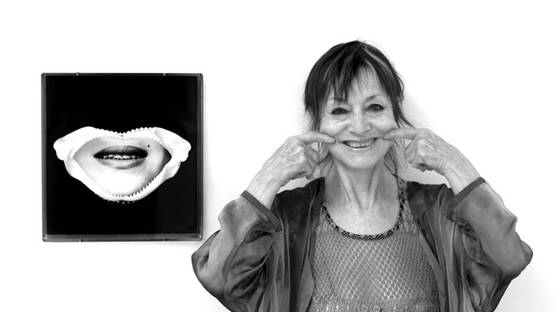 On the wave of female empowerment and destabilization of patriarchy, Penny Slinger started producing highly radical works which embraced not only the spirit of the time, but rather made a connection with female history respectively spirituality. By presenting herself as both subject and object in a group of collages and montages, the artist dealt with both construction of her personal identity in relation with the archetypal image of a woman. Nevertheless, sexually explicit or overtly mysterious images of herself often contrasted with occult and eerie backdrop are in function of representation freed from the historical cannons.

Penelope or Penny Slinger was in London in 1947. She took a pre-diploma at the Farnham School of Art and a degree in Art and Design at Chelsea College, in 1969. Slinger graduated by formulating her thesis on Max Ernst, and in this period she realized that her artistic identity was placed in Surrealism. Slinger was one of the few celebrated women artists in the milieu of the Swinging London – a catch-all term applied to the fashion and cultural scene that flourished in London in the 1960s, consisted largely of music, discotheques, and mod fashion.

The Artistic Development of Penny Slinger

The art debut happened during her student days when the artist experimented with varieties of female experience by altering her own appearance with mirrors, masks and makeup. An exhibition held in London in 1977 showed Slinger’s work explicit in depiction of feminine power and its anarchic approach to life. It challenged and provoked many of her peers as well as the critics. The artist left Britain and moved to the United States in 1978, but then went to the Caribbean in 1979 and stayed until 1994. At that point, Slinger came back to the US, where she stayed until present time.

The series of collages (1970-1977) featured in An Exorcism book evolved over a period of more than seven years. In her original conception of the Exorcism project, Penny Slinger also designed an extended version of the book accompanied by texts she wrote, as well as an elaborate film script. The film remained unrealized and the photo novella deluxe edition of the book unpublished. This series focuses on the ultimate romance – the death and rebirth of Self. All the action took place in a huge rambling mansion which was in a state of semi-decay. In those conditions the real became the surreal, the dream became the nightmare, and the nightmare became the reality.


The Immense Influence of Surrealism

Through the years, the artist has always pointed to European Surrealism as a source of inspiration and influence. As a young artist, her friend Sir Roland Penrose introduced PennySlinger to Max Ernst, German artist considered as one of the pioneers of the surrealistic movement and Dadaism. Inspired by his art, Penny Slinger made a film homage to Ernst’s graphic novel Une Semaine de Bonté (translated as A Week of Kindness), and began merging her own photographic collages with poetic writing.

In 1971, she produced a book of self-described feminist surrealism – 50 % The Visible Woman. As a personification of everyone’s introspection, this book blends visual and intellectual worlds of the artist, where each image and its poem represents a psycho-mythic confrontation, usually about the nature of how a woman is seen and how she sees herself. This book became a crucial milestone for British feminism, and it served as a source of major inspiration for many younger women artists who began working in the 1970s, who were looking for a radical leading voice of a generation. Slinger would revisit this pattern in the sixty-four-part series Mountain Ecstasy (1978). In these collages, Slinger merges ancient Egyptian, sexual, and occult found-imagery to celebrate tantric alchemy and the divine feminine.

The pioneering achievements of Penny Slinger

Magic And Introspection In The Works of Penny Slinger

Penny Slinger lives and works in the Santa Cruz Mountains, near San Francisco.

Featured image: Portrait of Penny Slinger - image courtesy of Pinterest
All images used are for illustrative purposes only