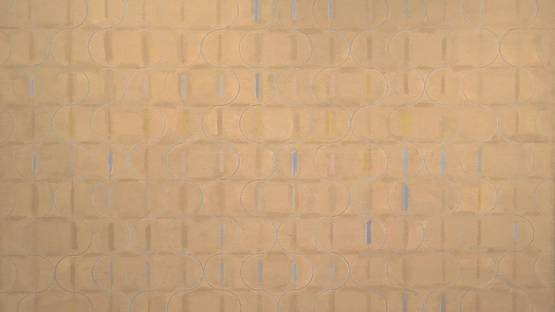 An American Abstract Expressionist painter, Perle Fine is best known for her combination of the fluid and brushy rendering of the materials and her use of biomorphic forms encased and intertwined with irregular geometric shapes. Being one of the first women to be admitted to the Artist's Club, she developed a distinct visual language to explore the depths of human emotion and vitality.

Fine's education began in her native Boston before she enrolled at the Art Students League in 1935 and fell under the influence of Piet Mondrian. In 1939, she began working with Hans Hofmann, both in New York and at his summer school in Provincetown, MA. Breaking with Hofmann's theories, she sought to find her own, more calm and contemplative mode of expression.

Investigating the possibilities of nonobjective art, she was insistent on the dynamism of color and line, inspired by music, dance, and the natural world. While primarily a painter, she also experimented with collage, at various times using paper, foil, and even wood. A tireless innovator, she experimented with new styles on her own terms, always attempting to push color and line to their most expressive.