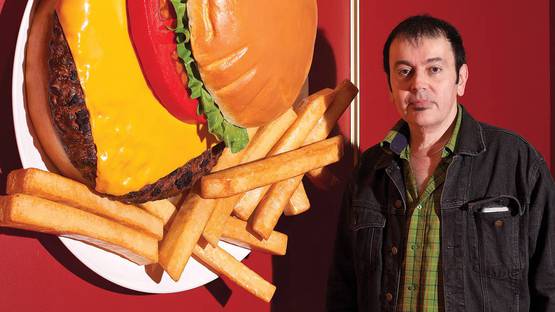 Peter Anton is an American contemporary artist best known for his large-scale sculptures of food, especially chocolates and other sweets that stimulate viewer’s memories, dreams and desires. His colorful, masterfully executed and highly detailed pieces glorify the significance and allure of food within people's lives.

Born in New Haven, the U.S. state of Connecticut, in 1963, Anton studied filmmaking at the University of Bridgeport. Fascinated by the important part food plays in people's daily lives and throughout history, Anton began making his mixed media sculptures in the early 1990s. To date, his sculptures include everything you can possibly imagine, from ice cream, lollipops, donuts and cakes to pizza, bacon, fried eggs and hamburgers.

Anton’s process of work is very specific – the artist starts with the process of eating, feeling, smelling, dissecting, and studying a new food over and over again so as to familiarize himself with a new subject. After he decides what materials and processes to use in order to get the effects and look that he demands, the artist starts with the long process of carving, sculpting, sanding, constructing, and painting his assorted media works.

One of his latest solo show was The Foodhist Temple at Unix Gallery. The show was on view in April 2015.

His sculptures are also featured in corporate and private collections, such as Kemper Museum of Contemporary Art; the Jordanian Royal Family; and the Portland Museum of Art, among others.

Peter Anton is represented by Unix Gallery in New York.

Peter Anton is currently based in Connecticut.