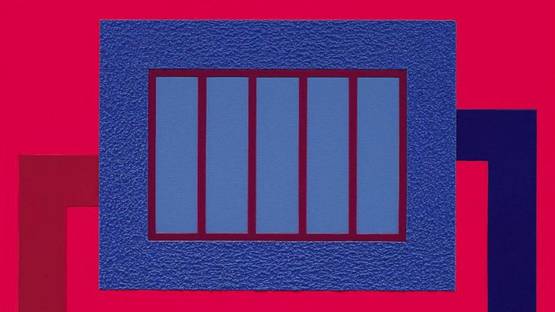 A contemporary American artist, Peter Halley is best known for his neon-colored geometric paintings. Associated with the Minimalist, Neo-Geo, and Neo-Conceptualist movements, Halley has developed themes meant to critique the utopian vision of avant-garde idealists and the narratives produced by various cultural authorities.

Born in New York in 1953, Halley began his formal training at Phillips Academy in Andover, Massachusetts, from which he graduated in 1971. Reading Josef Albers's Interaction of Color has made a great influence on his career. Spending a year in New Orleans in mid-1970s and absorbing the vibrant cultural influences of the city, he began using commercial materials in his art. He also graduated from Yale University, New Haven, with a degree in art history and received an MFA in painting from the University of New Orleans in 1978.

Since the early 1980s, Halley has honed in on motifs related to barred windows, prison cells, and the conduits and grids composing cities, turning it into a language of geometric abstraction. Using geometry as a metaphor for contemporary society, his works reflected everything from architecture to societal organizations. Over the years, Halley's compositions became more complex, increasing the number of conduits, prisons, and cells in each painting. He also expressed his critical approach in articles and essays on post-structuralism, post-modernism, and the 1980s digital revolution.