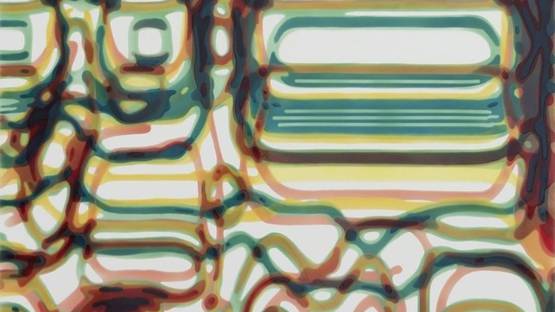 A contemporary abstract artist, Peter Zimmermann is best known for his blob paintings. He mainly uses programs such as Photoshop to express his unique point of view.

Born in 1956 in Freiburg, Germany, Zimmermann currently lives and works in Cologne. He began his studies at the Akademie der Bildenden Kunste, in Stuttgart, Germany. In 2002, Zimmermann received a professorship at Kunsthochschule fur Medien, Cologne, Germany. He has also been a guest lecturer at Universitat Luneburg in Luneberg, Germany. His works have been shown at several museums, including the Columbus Museum of Art in Columbus, OH, the Museum Wiesbaden in Wiesbaden, Germany, the Museum der Moderne Salzburg Rupertinum, in Salzburg, Germany, the Cranbrook Art Museum in Detroit, MI, the New Orleans Museum of Modern Art in New Orleans, LA, and the New York Public Library in New York, NY

He initially became famous in the 1980s with his collection entitled Books Covers, but his most famous series is the Blob Paintings. Computer-generated, the artist first used found materials and abstracted them through Photoshop. The images are then transferred to canvas by means of airbrushing, and carefully applying epoxy over the image, creating an Abstract, multi-textured form. The resulting works appear as having an inner light emanating from within the Abstract form.