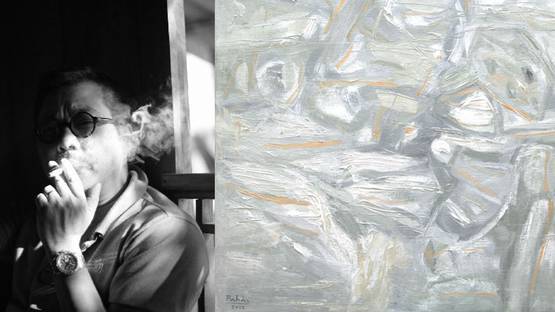 Pham An Hai is a Vietnamese abstract painter, born in 1967 in Hanoi. His paintings are inspired by landscapes, cityscapes and nature, but he offers his own personal interpretations of these familiar themes.

Hai graduated from the Hanoi Institute of Fine Art in 1995 and received his Master of Art degree in 2006. He started out as an artist doing expressionistic paintings and also figurative art, but soon moved on towards abstraction. The abstractionist language has proved to suit Pham An Hai who, by nature, is rather more prone to emotional expression than to description. He tends to perpetuate evanescent things, sometimes beyond perception that one cannot grasp, but only vaguely guess.

He has abandoned the natural appearance of things and increasingly constructed his art through a net of consciousness and understanding of the surrounding world, expressing himself through nature instead of observing it. His canvas has become a vehicle to express his emotion while he developed his pictorial vocabulary with forms and expressions that reflected his innermost feelings. Despite being non-representational, many of Pham An Hai’s paintings may be viewed as cityscapes or landscapes from his home city of Hanoi and its surroundings, or paintings from nature. Shapes of houses, buildings and narrow lanes can be distinguished, giving the feeling of atmosphere of the city in various seasons or time of the day. At another level, his paintings may also reflect inner landscapes of the soul and heart.

A master in the use of colors, Pham An Hai describes colors as the purest form of expression, referring to them as musical notes. The choice and combination, and the intense experience of colors through their value are important features in his works. Learning to and knowing how to put them together in an understandable manner became an integral part of his artistic journey.

His oil on canvas works have developed into larger and bolder canvases over the years, layered and richly textured. More recently, Pham An Hai has developed an interest in the mundane objects of our daily life while enlarging his palette of colors. The Teapot dream series belong to this new period, demonstrating the willingness of the artist to keep searching for new subjects, for new experiments while keeping his distinct style of color, form and composition.

Pham An Hai has participated in several exhibitions in Vietnam, United kingdom, Australia, Hong Kong, Singapore, Belgium, Thailand, Japan, the United States, Italy, South Korea and Dubai. He is one of the contemporary Vietnamese artists whose works have been sold in auctions, presented at Sotheby’s South Asian Art auctions over the last three seasons, and his works were bought by Vietnam Fine Arts Museum and National Gallery Petronas Malaysia.