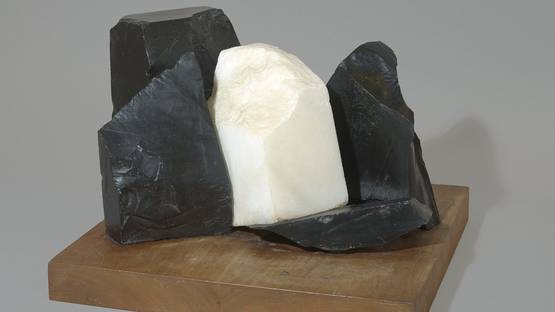 The pioneering first-generation son of an Italian stone carver, Philip Pavia "turned rocks into art." Starting his career as a draftsman and watercolorist, Pavia made his mark with sculptures spanned all-abstract bronzes, black-and-white abstractions in Carrara marble and, just prior to his death, a dozen monumental terracotta heads.

Born in 1911 in Bridgeport, Connecticut, Pavia spent two years at Yale studying architecture before transferring to the Art Students League of New York in 1931. There, he met his lifelong friend Jackson Pollock. He settled in New York City permanently in 1937, and along with artists such as Bill de Kooning, Landes Lewitin, Franz Kline, Jack Tworkov, worked as a Federal Art Project artist. He described this experience as formative for the group that pioneered abstract expressionism:

Pavia is celebrated for large-scale abstract carvings and assemblages. His works ranged from boulder-size human heads to carefully stacked piles of roughly chiseled marble. While his style varied throughout his career, he remained staunchly committed to the idea of the avant-garde in American art. Known for large-scale, totemic pieces, he also produced a number of public artworks.