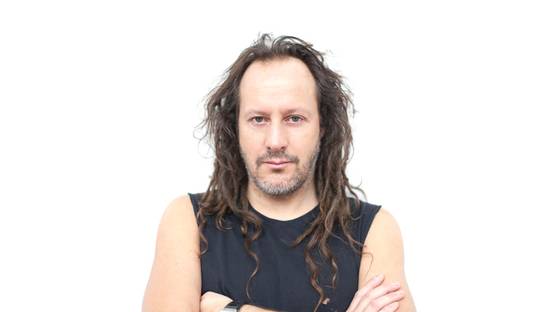 Philippe Pasqua is a self-taught French painter and sculptor, a master of capturing fleeting nature of mortal existence. The artist is known for his boldly raw nudes and sensual up-close and personal portraits, and sculptures created from materials such as human and animal skulls embellished with precious metals and butterfly wings. Pasqua was born in 1965 in Grasse, France. He dedicated himself to painting when he was 18.

Disabilities, differences, obscenity and the sacred are some of Pasqua’s favorite topics. As an example, he portrays the ones from the margins of society - transsexuals, prostitutes, handicapped, people with Down’s syndrome and other disabilities, or people who are blind. Facial features of his portrayed subjects seem to be painted on as if cut in with a knife – an abstracted flesh lies in stark contrast with the peaceful and eerie expressions of his subjects.

Philippe Pasqua’s representation of flesh references Bacon, while his reverence for portraiture and loose brushstrokes is influenced by Hals. For the viewer, it seems that his paintings with loosely rendered, expressive brushstrokes don’t represent skin, but rather flesh. Opposite to his large-format paintings of flesh and bone, Pasqua creates drawings and layered, mixed-media works on paper in which the figure becomes a halo, mist, smoke – emerging from the sketched contours and textures.

Since 1990, Pasqua’s work has been featured in numerous group and one-man exhibitions throughout Europe and also in Hong Kong, Mexico, South Korea, Israel and the United States. His artworks were also featured in several publications, from The New York Times and Vogue to Le Monde and Le Figaro. He is represented by UNIX Gallery in New York.

All images courtesy of UNIX Gallery