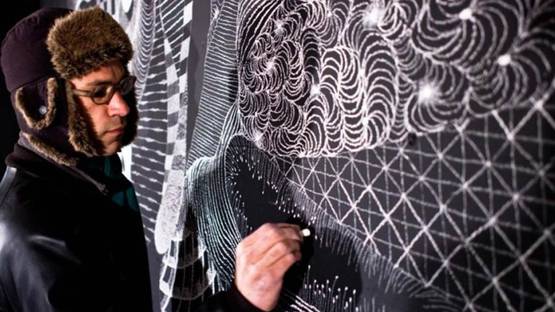 Philippe Baudelocque is a French street artist whose work in chalk can be found on dark walls around Paris, Marseille and other cities, showing his intricate cosmic patterns, creating animals.

Philippe Baudelocque was born in Villecresnes, France and graduated from the National Superior School of Decorative Arts in Paris. According to Philippe, college helped him to become an artist by teaching him how to work with the most open possible spirit and the graffiti practice has showed him how to paint on walls.

Baudelocque began his artistic career as a teenager by trying to do graffiti. In the beginning it was really hard for him and he tried many things. Eventually, he abandoned crews and spray paint for a more figurative art. He started in 2009, "Cosmic Animals", a series of frescoes depicting wildlife. The concept was born with a simple white chalk that gives life to an animal on a blackboard wall.

So, he started to create his art with impermanent mediums like chalk or white oil pastels, often drawing on black background. His work reminds one of constellations and the mythical beings they represent; each animal is created with a mosaic of delicate line work in the form of organic and geometric patterns that merge to form each piece. With beautiful layers, these three-dimensional animals look like they're ready to jump off the city walls. His shapes compose his ephemeral urban creations voluntarily available to climatic and human hazards…

When the work of Philippe Baudelocque was discovered, everything suggested to street art. All ingredients appear together: an artist who chose the street to exhibit works characterized by their unusual shape and duration of very short life. The fragile existence of a work in the urban environment strengthens Baudelocque to choose this more ephemeral method. Although a specific strain of street art, the artist does not recognize himself in this movement. No transgression or vandalism, the works are distinguished by their lack of demands while drawing attention to the elements that go beyond the human condition. No satire of society emerges from his works and if there should be an inquiry, it would exceed that of the urban setting and would focus on the elements that constitute the living and it universally.

According to Philippe, if artist have both talent and practice – he is the master. Some of the "masters" he admires are James Turrell, Jean "Moebius" Giraud, Fabrice Lacaze...