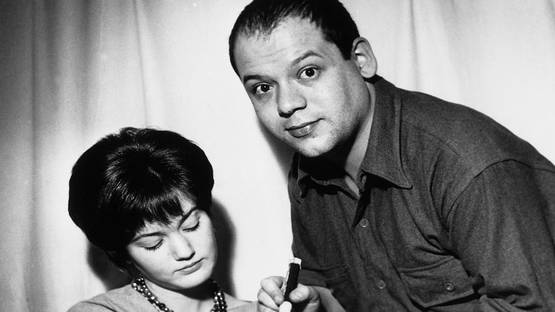 Welcome to the modern age where anything can be the piece of art. One young Italian, Piero Manzoni, decided to question the status of the art object as it has been represented throughout modernism. His ironic approach to Avant-garde art directly prefigured Conceptual Art. Compared to the work of Yves Klein, his influences included Marcel Duchamp and Ben Vautier. Self-taught as an artist, Manzoni first exhibited in 1956, at the age of 23. His early work was connected to the Arte Nucleare movement, established in 1951, Italy. Manzoni was the one of the main representatives and together with Lucio Fontana published the manifesto Per una pittura organica (For an organic painting). At the exhibition in The Castello Sforzesco in Soncino, his talent has been for the first time put in evidence.

Manzoni experimented with materials and pigments

Empty Space Without Lines and Colors

One year later, he started to call into question status of the art object. Of crucial importance for that change of Manzoni’s philosophy was his visit to Yves Klein’s exhibition Epoca Blu at the Galleria Apollinare in Milan, 1957. where Klein showed his 11 identical blue monochromes. As a respond, Manzoni produced his Achromes, empty spaces without lines and colors. Experimenting with materials and pigments, his canvasses were coated with gesso or filled with kaolin clods. Sometimes it was just relief paintings depicting folded cloth. Later, his Achromes were created from fiberglass, cotton wool or bread rolls. Some of them were impregnated with phosphorescent color or soaked in cobalt chloride, so the colors could change over time, or enable canvases to glow in the dark. This works showed the influence of American artist Robert Rauschenberg and his canvases painted in white. In that time, he was producing looking to the prevailing trends in Art Informel.

One of the most famous Manzoni’s manifestations, Consumptions of the dynamic art by the art-devouring public, took place in Milan, 1960. He marked boiled eggs with his fingerprint and gave them to the audience to eat. That way the artist shifted the role of public who, engaged in the artistic activity, had become work of art. By touching any object, it was changed into the art piece. His most radical gesture was the creation of the 90 cans of Artist’s shit with the content of 30 grams that was sold for the current price of gold (30 gr of something in the can is equal to the 30 gr of gold, which was approximately 37 dollars). The content will remain the enigma since opening would destroy the value of the artwork. But that was not the obstacle for the collectors to pay over £ 180 000, which was the price for 54th can at the auction at Christies in 1915.

The closure of Manzoni’s Achromes and the disappearance of the artwork as a literal object produces the sufficiency of the artist himself. Dispossessed of his status of producer, Manzoni created the projection of his person, replacing his body with his work. The series of Artist’s shit, Artist’s breath and Artist’s blood became as the result of the process of the expropriation of the artist’s corporeality. He was offering his own body as a piece of art and parts of it as the very valuable objects. Piero Manzoni’s work has been the subject of numerous solo and group exhibitions, including international retrospectives at the Museum d'Art Moderne de la Ville de Paris (1991), the Serpentine Gallery, London (1998), and the Museum d'Arte Contemporanea Donnaregina, Naples (2007).

Death as a Piece of Art

The work of Piero Manzoni had a great influence on a generation of younger Italian artists, who had been exhibiting together on the first Arte Povera exhibition held in Genoa, 1967. He was a critic of his time, questioning mass production and consumerism in changing Italian society after the World War II. The artistic legacy of Piero Manzoni is constituted of works realized in a very short span of time, from 1956 to 1963, when the artist suddenly died at the age of 29. His death was also declared as a work of art, thanks to his contemporary Ben Vautier who signed Mazoni’s death certificate.

Featured image: photo via artesky.it
All images used for the illustrative purpose only