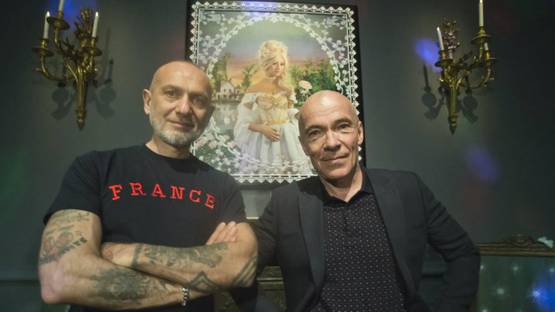 Faithful meeting and how it all started

Pierre Commoy was born in 1950 in La Roche-sur-Yon and during the 70’s he studied photography in Geneva, later working for the magazines Rock & Folk, Depeche Mode and Interview. Gilles Blanchard was born in 1953 in Le Havre and after the studies at Ecole des Beaux-Arts, he moved to the capital of France where he painted, made collages and illustrations for magazines and advertisements. Their faithful meeting occurred at the opening of Kenzo boutique in the city of light in 1976 and, as they like to say, they left the party on the same scooter, never separating again. That resulted with a prolific collaboration and passionate relationship that last for forty years. The artists conjoined their mediums and techniques – Pierre was doing a photo and Gilles painting on the print and after the publication of their works for the magazine Façade, with portraits of Andy Warhol, Mick Jagger, and Iggy Pop and the first show in 1983 at Galerie Texbraun in Paris, they entered the spotlight, exhibiting worldwide and having numerous engagements.

At the beginning, they worked for different magazines, getting the first assignment to create the album cover for the album of Amanda Lear, which opened the door for further collaborations with musicians such as Mikado, for whom they directed their first video, Sandii, Etienne Daho, Sheila, and Krootchey. Their pictures are delicious representations that refer to religion, sex and fame. Easily reproducible, they are often seen as postcards, posters, and book illustrations. The creative process starts with precise and carefully designed details, first on drawings and then on an actual scene where opulence of objects and decoration creates a rich theatrical spectacle, emphasized by lighting effects. Pierre et Gilles are also in charge of costumes, choosing the make-up and hairstyle with the help of experts. The next step is photographing and retouching the unique print with paint.

Less concerned about theatrical staging at the beginning, their first pieces are characterized by simplicity and unassertive colors. After their travel to India, the artists started to implement religious and mythological themes that later evolved into eroticism, burlesque and children’s tales. Their characters, whether they are friends or famous persons, favors sensuality, sublimity, and eroticism through their roles of sailors, princesses, fishermen or saints. Constantly remodeling the portrait art, this artistic duo moves the limits of contemporary aesthetic using the explicit references to a gay culture spreading the message of tolerance and openness. It was not surprising when the people protested in Vienna in 2012 when their work Vive la France was displayed on large street posters as an advertisement for Nackte Männer or Naked Men, an exhibition created by Ilse Haider at the Leopold Museum. Promoting the idea of multi-ethnic French society, Pierre et Gilles represented three nudes of French footballers, black, Arab and white one, with their genitals fully exposed. Because of the increasing public pressure, the artist was forced to self-censorship, using the colored ribbons to hide the genitals.

Works of Pierre et Gilles is displayed in several major international institutions including the Maison Europeenne de la Photographie in France, the Ginza Art Space in Tokyo, the New Museum of Contemporary Art in New York and the Gallery of Modern Art in Glasgow. Their first autobiography named Autobiographie en photomatons 1968-1988 was published in 2012 where they described the 80’s in the capital of France, an important decade for the gay community which started to stepping out of the closet, gathering in the Palace, nightclub inaugurated by Grace Jones. The book also follows three decades of successful collaboration that established the artists as masters of pop portraiture.