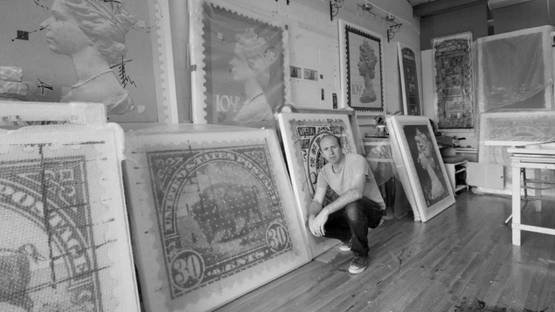 Creating challenging interpretations of reality, Piers Bourke’s work plays with two and three-dimensional structures. With the motivation to highlight the beauty of everyday objects, he is using the digital print on the wooden panels, making the paradox between traditional and modern materials. His experiment consists of photographed themes shown from different angles and points of view. That way, linear form becomes a three-dimensional piece of art with the illusion of depth, confronting at the same time representation and abstraction, considering that the subject matter only reveals itself from the frontal point.

The Color Changes the Point of View

In the focus of Bourke’s work are everyday objects, sometimes the forgotten ones, as legendary London’s phone boots, or post stamps. By changing the color or arrangement of images, he is challenging viewer’s perception of reality. He is encouraging him to wonder what the world would look like if, for example, the grass was red or the sky was green. We are allowed to question everything and color is a very convenient medium to explore the way people look at the things. By repeating the same image in a different color, he imposes the idea of challenging associations, provoking the viewer to look his work on more than one level.

Visual is the most important aspect in his work

Third Dimension for the Best Expression

Fascinated by the early renaissance perspective, especially the way that architecture was painted at that time, Bourke was never completely excepted two-dimensional painting. He has considered that edges of the canvas must be the part of the main surface. So he used them as an integral part of the composition, but soon that was not enough for him. His expression was craving for three-dimensional work. He started to experiment with photography which enabled him to have more freedom. The next step was designing and making the furniture.

Bourke received his BA in Fine Art from the University of the West of England, Bristol and attended Chelsea College of Fine Art and Design and he is currently studying for an MA in design at the University of the Arts London. He has had several solo exhibitions in the UK and France and recently exhibited in New York. His work has been shown at Affordable Art Fair Singapore 2015, The London Art Fair 2009, The Toronto Art Fair 2008, Art Sante Fe 2008, Form Art Fair 2008, Art London in 2008 and 2009, Open Art Fair, Jaarbeurs Utrecht, 2009, AAF, New York, London, Amsterdam, Brussels and Paris 2007/09 and at Art Dublin, Ireland 2007/08.

Looking Through the Eyes of Artist

Piers Bourke challenges space and form combining panel images with three-dimensional structures. He represents the things that have been used and seen many times before, giving them the new value. Bourke is trying to create different interest in something usual and familiar. Using various techniques, photography, painting and sculpturing, he is challenging the perspectives. His work is essentially fun and playing. Everyday sights, after reworking and recoloring, are getting the new look and different meaning. With the visual as the most important aspect, he is trying to make the viewer see things in the same way as he did.

Featured image: Piers Bourke - Artist in his London studio
All images courtesy of the artist